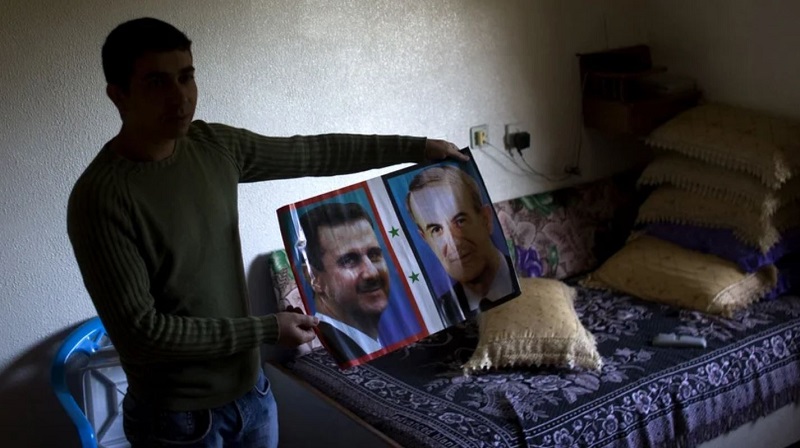 What Hafez May Have Told Baschar on His Death Bed

August 26, 2011 11:41 am 0
The golfer US president needs worry no more
Attila the Hun reborn as Assad the Arab
Assad Kills 28 Civilians

For those who follow Syria closely, the contrast between the rule of Hafez al-Assad for 30 years and his son Baschar for the last 11 years is worthy of some conjecture on our part. What Hafez may have told Baschar on his death bed.

If one has to imagine a serious conversation, on Hafez death bed between père et fils, it probably went this way.

WHAT HAFEZ MAY HAVE TOLD BASCHAR BEFORE DYING

Son, there are ten important instructions you should keep in mind to maintain control and defend your throne.

You need to balance between chaos and stability. As long as the west fears what we are capable of doing, they will remain fearful, which means friendly or neutral. Use the Palestinian cause to stir trouble, threaten your enemies like Israel, and kill and terrorize in their name. Use our supporters and appeasers in Europe and the US to save you during hard times. If pressure rises against you, talk of peace with Israel, the west will ease back. Never, never achieve peace though. The moment you do, you are finished.

Rely on the same staff I leave behind all committed to our control. Never let an outsider into a position of power where security or the army can be compromised. All what appears to be positions of power like Minister of Defense or VP, appoint weak Sunni Muslims or Christians who cannot threaten us and who have been loyal to me. But always keep the security apparatus in the hands of the Alawite hands. Keep the Air Force Intelligence above all others in terms of funding and staffing by loyalists. Change middle rank staff often, across the board, to prevent any military coup.

It’s better to strike fear into the hearts of the people than to be loved. Never fear another Hama to save yourself and to maintain the Assad family control. This is our destiny. Maintain an iron grip on the opposition and never let one figure rise to be viewed as an alternative to your rule. Use “divide and conquer” on every occasion you can because the Arab mind and culture easily fall prey to that policy.

Keep yourself equidistant from every Arab ruler but maintain warm relations with Iran secretly and never publicly. Any public rapprochement with Iran will be viewed as a threat by the Arab rulers. Follow my lead and history as a guide. Use the Arab League to maintain balance and beware of Egypt and Saudi Arabia because they both have the capability to diminish Syria’s importance in the Arab world. Play them against each other often if necessary.

Provide low-level intelligence to the west on a regular basis to maintain the status quo. Always play on their needs because geography is their enemy and Israel is their weakness. Never interrupt oil supplies to the west, this is one of their red lines. Threaten but never disrupt. Treat oil like you treat Israel. If caught red-handed, always lie. Eventually lies turn into truth if you are persistent.

Never allow western armed forces to be stationed in neighboring countries. They can use their bases to attack us. Use terror with abandon but also with caution the way I used it against the US Marines in Beirut in 1983 with great success. Develop your own proxies of terror if necessary and never leave your fingerprints behind if you need to attack western targets. Remember how we used Carlos in Europe? Follow my lead.

Never leave Lebanon and keep supporting terror secretly, including Hezbollah, to protect your back from the only formidable army in the region in Israel. Hezbollah is an invisible terror machine dedicated to Iranian hegemony and yours if you play it right. But your support should be very discreet the way it should be with Iran. Empowering Iran and Hezbollah publicly will amplify the pressure against you. While keeping warm relations with Iran, always beware of their extremist Mullahs. Their agenda is not ours.

Keep an open backdoor channel with Israel but no warm relations. Provide them with hope but no security to keep them off balance. Keep the Golan Heights quiet because that’s a red line for the Israelis, so are the hardcore Islamists, which you can use as a scarecrow.

Maintain a very low profile. Maintain silence so that people fear you. Above all, maintain an iron grip on the economy and the people. Never forget, this rule is your to lose and yours to keep. If you follow my rules, the Assads will rule for 400 years my son.

WHAT HAFEZ MAY HAVE TOLD BASCHAR ON HIS DEATH BED

In our opinion, this is what Hafez may have told Baschar on his death bed. But Baschar never followed his father’s advice with regard to publicly supporting the extremists Mullahs and Hezbollah, on building a nuclear program, and on leaving his fingerprints all over Iraq. The US was willing to forgive his past mistakes but not his close association with Iran, Hezbollah, and Hamas more recently as well as promoting a nuclear program thus following the Mullahs agenda.

Much effort went into persuading him to maintain a healthy balance but he refused thinking he, with the Mullahs, can scare and outsmart the US, something his father probably warned him about considering how Hafez maintained warm relations but also his distance from Iran.

What Hafez May Have Told Baschar on His Death Bed