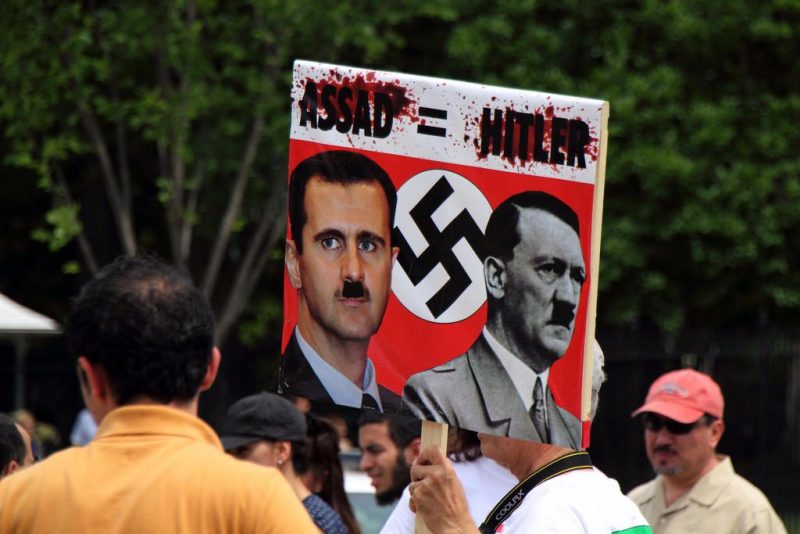 When Fear of Islamism Trumps Fear of Hitlerism

September 25, 2018 8:24 am 0
Saudi Arabia calls for urgent U.N. meeting on Syria
Deter the madness of Assad
Syria is Caught Between Bombs and Butchery

In the Middle East, Islamism, using extreme religious Koranic interpretations, has been our enemy ever since Hezbollah bombed the U.S. Marines barracks in Beirut in 1983. Two suicide bombers, driving two trucks, killed 241 Marines and 58 French peacekeepers. In the U.S., it was 9/11/2001 when 19 suicidal maniacs plane dived into the twin towers in New York and the Pentagon in Washington D.C. To this day, fear of Islamism trumps fear of Hitlerism.

Because of Barack Obama’s Iran Deal, we watched the rise of ISIS in Syria and Iraq that culminated into a Jihadist empire-building steps that ISIS labeled Islamic State. By turning a blind eye to Shiite Muslims butchering Sunni Muslims in Syria, Obama, by design or by sheer stupidity, fostered ISIS to fight back using fundamentalism as its shield. The way Khamenei uses Mahdi’s appearance to rule the world as an excuse to spread death and destruction.

The same western countries that feel threatened by Islamism and its terror seem to ignore the rise of Hitlerism in the Middle East. The last seven years of Syria’s civil war provide a perfect example.

Dropping the Ball on Hitlerism

When Abu Bakr al-Baghdadi formed the nucleus of an Islamist Caliphate using ISIS recruits of soldiers pouring into Syria to fight the Assad regime and Obama’s apathy, the west panicked. Since, the United States, under Presidents Obama and Trump, have poured billions into a battle royal to defang and neutralize ISIS and break apart the Islamic State.

So much so that we dropped the ball on Hitlerism we find in Damascus in the Assad regime. Grant you, Assad is a weakling compared to the terror machine of the Nazis. But his willingness to commit inhumane crimes against anyone standing in his way reminds us all of another era in Europe.

The difference between that era and today’s Hitlerism lies in the strength of the machine behind the ideology. Just because Assad does not have the means to invade the Middle East today, the help he is getting from Khamenei and Putin may yet prove to be lethal. Just ask Israel why it is so concerned about Assad smuggling missiles to Hezbollah. Why is this weakling, Israel keeps ignoring, finds it riskless to prepare his allies for a war against Israel? If Assad had the means Hitler had in the mid 1930’s, he would not hesitate to spread terror to anyone he deems his enemy.

Just because Assad is willing to compromise politically today does not mean he will always compromise when he is more powerful. Yesterday, the regime had no defensible borders. In two weeks, Assad will have a Russian-made S-300 missile defense system. Will that tamper this baby Hitler, or will he become even bolder towards Israel? When fear of Islamism trumps fear of Hitlerism, we lose much more.

Why fear of Islamism trumps fear of Hitlerism when Islamism is easily defeatable diplomatically, militarily, and economically? Can you say the same about Hitlerism in Damascus aided by Iran?

Israel Lost to Assad a While Back

Israel lost to Assad long time ago because it chose to strike deals with Hitlerism next door rather than defeat it. The Jewish State chose to concentrate on the Islamic State than Hitlerism when Assad threats, with help from Iran and Putin, are far more lethal. Just because Assad is willing to negotiate does not make him less dangerous. When fear of Islamism trumps fear of Hitlerism.

No doubt we should all fear Islamism. It is raw, barbaric, and unyielding. But so is Hitlerism in Damascus. Had Israel taken out Assad in early 2012, the FSA would be in power in Damascus today. Even if not, the lesson we learned from Morsi of Egypt is that Islamism cannot govern. Its implosion is a certainty.

Hitlerism in Damascus, on the other hand, just keeps getting stronger and stronger. It may have reached the point of no return; yet, the world is still contemplative when it comes to dealing with secular terror just as deadly as Islamic terror.

When Fear of Islamism Trumps Fear of Hitlerism