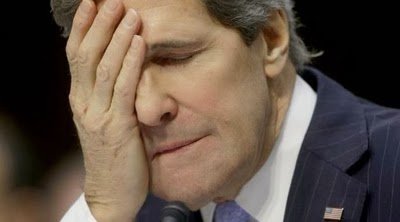 In what one can describe as just another day for my overachiever friend Falafel, this time around he finds himself on the fourth floor of Foggy Bottom waiting to interview Secretary John Kerry.

Kerry: “It is absolutely essential your president does not interfere against ISIS”

Kerry: “Our aim is not to defeat ISIS in order to claim Assad is the best alternative”

Jaafari: “President Assad is very thankful for protecting him. He and Mrs. Assad send their sincerest regards”

Kerry: “Tell him John Kerry does not forget his friends easily. I have an interview now. Use this backdoor to exit”

Kerry rings his secretary who just happens to reach her desk. Falafel is ushered to interview John Kerry in his office.

Falafel: “Let me start by asking what is the latest US position on dealing with Assad”

Kerry: “Well, as you know, ISIS has become quite a danger to this country. We must defeat it first”.

Falafel: “Can you explain why is it more of a danger to the US than Iran, Syria, and Hezbollah combined?”

Kerry: “Well, they killed James Foley for one”

Falafel: “But James Foley’s family confirmed it was Assad who kidnapped their son. How did ISIS get hold of Foley?”

Kerry: “This is all propaganda. Foley was kidnapped by ISIS and his parents are clueless ”

Falafel: “U.S. State Department spokeswoman Marie Harf confirmed, during her press briefing on August 11, 2014, that it was Assad who forged ISIS. If so, does that not make Assad far more dangerous than ISIS because he and Iran control it like they control Al-Qaeda, Hamas, Hezbollah, and the countless militias in Iraq, Syria, and Yemen?”

Kerry: “I did not see that press briefing, so I cannot respond to your question.”

Falafel: “Is this the reason why you and President Obama are not really serious about annihilating ISIS? That ISIS is nothing but an excuse to keep Assad in play? That the ultimate goal is to annihilate Israel with Khamenei and Assad’s help?”

Kerry: “You have one vivid imagination son. We will defeat ISIS and after ISIS, we are going to defeat Assad and Iran. We are committed to this goal of eradicating workplace violence anywhere”

Falafel: “I would like to share some statistics with you Mr. Secretary. So far, the US and her allies conducted 600 airstrikes killing 1,000 ISIS fighters. This is less than 2 people per strike. These statistics are congruent with ones attacking very high value targets. How do you explain this coefficient?”

Falafel: “About 1/3 the size of Syria is under ISIS control. This is 16 times the size of Kobani, which has been the subject of 69% of all the air strikes. Any reason for this discrepancy?”

Falafel: “Since September 23, the anniversary of the first air strikes against ISIS, ISIS has doubled its territories. How do you explain this phenomenon?”

Kerry: “This interview is over. You have no clue how scary it is to receive an envelope from Vladimir Putin with large photos of him shirtless”.