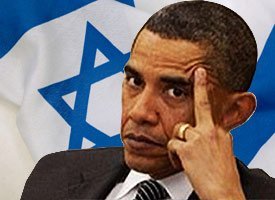 In an apparent response to Syrian army artillery fired against Israeli citizens in the Golan Heights, the IAF retaliated by striking the Syrian army “Brigade 90” located in Quneitra.

When Barack Obama found out that Assad has attacked Israeli positions, he hit the roof. At the time, he was smoking and chewing.

The following is extracted from an audio tape sent to Falafel by the 37-year old Ben Rhodes of what transpired next.

Falafel routinely sends me everything about Obama, especially when Obama stands tall.

Obama: “Ben, I want you to call Assad’s Ambassador to the UN that Jaafari no good mongrel to warn him”

Rhodes: “Assad striking against Israeli people or positions is intolerable Mr. President. I agree with your decision. Not Hamas, not Hezbollah, not Assad, or Iran will be spared should they test your will to protect Israel”

Obama: “Let him know that if Assad fires again, I will personally mobilize 250,000 American troops to invade Syria and remove every Mullah, every Ba’athist, every IRGC, every Assad supporter, and every Hezbollah operative anywhere in sight. You hear me?”

Rhodes: “I will convey the message with the appropriate and unequivocal strong diplomatic language”

Obama: ‘No diplomacy. Just let the bastard know that my love for Israel and the Israeli people will not be tested. I mean business”

Rhodes: “Consider it done Mr. President. Shall we issue also a press release?”

Rhodes: “How would you like to handle your voter base? Those who voted for you on the basis of keeping our armed forces in their barracks”

Obama: “Not when it comes to Israel. Are you hearing me Ben? Israel is off limits”

Obama: “Then I want you to call PM Netanyahu and convey to him my sincerest regrets and my full support for his position and response”

Rhodes: “Will do Mr. President. I can already see the headlines in Israel: Obama stands tall”

Obama: “In fact, invite him for a round of golf next week. It is time to show Assad and the Mullahs in Iran how much I support the State of Israel”

Obama: “Also, call John Boehner and ask him to invite him to address Congress about the danger of Assad and Khamenei”.

Rhodes: “Senator McConnell may get jealous. How about a joint session of Congress Mr. President?”

Obama: “Excellent idea Ben. When PM Netanyahu arrives at Andrews, dispatch Marine One to bring him here. I want the whole world to know how much I support Israel”

Rhodes: “Shall we also invite his Ambassador Ron Dermer to attend?’

Obama: “Of course. Any Ambassador who stands against Islamic terror is welcome in my White House”

The audio tape fades away here. Then few eligible words are heard in the background before the tape fully ends.

Obama: “Do you think we can get more funds from Jewish donors for this tape? I need to build that library Ben. I am desperate.”