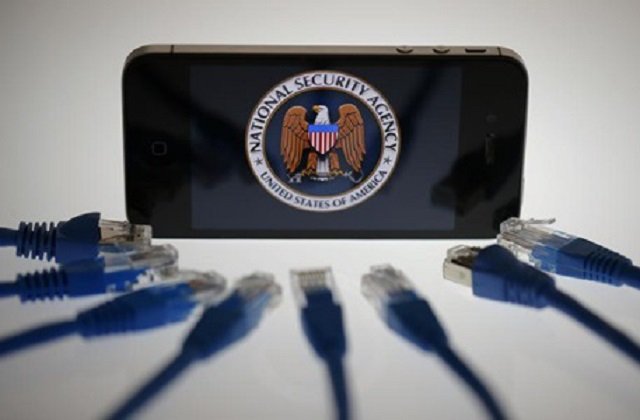 Falafel Got a Recording from the NSA

As Falafel walked a narrow street in Abu Rumaneh in Damascus, someone dropped a USB drive in his pocket and started running like the wind. Intrigued, Falafel held it in his hand. The USB was engraved with the following inscription “NSA – For Your Ears Only”. Falafel got a recording from the NSA.

Falafel hailed a taxi, which dropped him at his apartment in 3 minutes flat bypassing the main arteries with their roadblocks. After reaching his computer and opening the file, he could hear two people on the recording talking long distance. One was Barack Obama and the other was Ali Khamenei.

Obama: “Greetings to the supreme master.”

AK: “What is it you want Mr. President”

Obama: “Ali, why is it you are always in a bad mood when I talk to you? I recommend a beer or two to loosen up.”

Obama: “Why did you kidnap three Americans in Iraq the day I announced all the other hostages were released? Don’t you get it man?”

Obama: “I am trying everything here to help you reach the goal we agreed upon and instead of going all the way, you kidnap more Americans. What is wrong with you Ali? Don’t you want Israel to burn?”

Obama: “How many times do we have to have this conversation? Forget America for three months. All I ask from you is three months. Just concentrate on the job I want you to do. Go after Israel you dimwitted ass.”

AK: “My mood suddenly is better. In fact, you can’t see me but I’m smiling now. Happy to see you down on your knees begging me.”

Obama: “Do you want to destroy Israel or not? Because if you don’t, I still can stop bombing ISIS and I still can remove Assad from power to harm you. You forgot that favor already?”

AK: “No one tells great Iran what to do. We will kidnap Americans as long as it pleases us. We have time for Israel. Why should we give you the credit?”

Obama: “Because I am the architect of this plan you moron.”

AK: “Go eat some Okra Obama. America is the great Satan and America comes first when it comes to our terror.”

Obama: “Please Ali, I ask you for the last time, please attack Israel. I gave you everything you asked for in order for you to attack Israel with thousands of missiles. What are you waiting for? Stop embarrassing me by kidnapping more Americans.”

AK: “What do I get if I promise to attack Israel while you’re still in office?”

AK: “I want to sleep in the Lincoln bedroom.”

AK: “I also want to award Valerie, Ben, and Susan the Iranian Medal of Bravery live at the Capitol steps.”

AK: “Oh, and I also want Michelle Obama to cover her face for one year.”

AK: “Right after my wishes are completed. Have you not learned yet how we negotiate?”

Falafel could hear some scratching and the audio was over suddenly. Falafel got a recording from the NSA that explained a lot about Barack Obama.

For the first time Falafel understood why and how the supreme leader in Iran had such sway over Obama and his policies. It’s an extortion scheme based on fulfilling one of Obama’s darkest secrets.

Falafel Got a Recording from the NSA