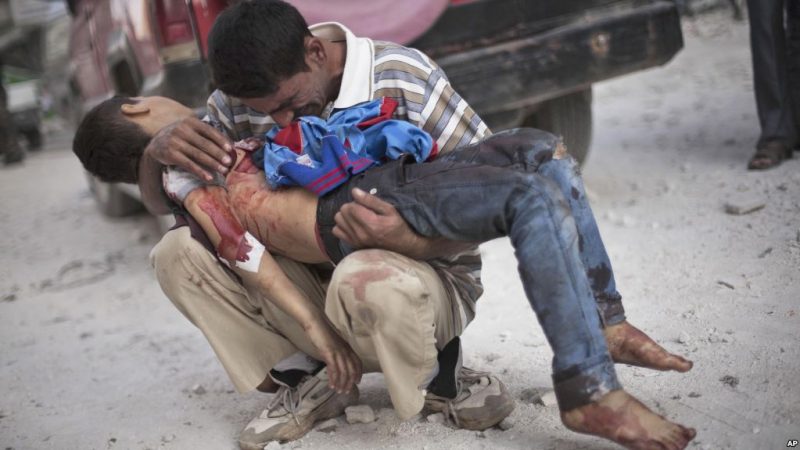 March 15, 2013 10:25 am 0
American Capitalism is Vulnerable to National Disasters
New HOV Terrorist Lane Obama Inaugurated for His Mistakes
Syrian Observer is an Extension of the Muslim Brotherhood

Today, Syria enters its third year of a civil war ravaging life by perpetuating death. One that started as a peaceful uprising and which turned into a civil war after 15 months of Assad terrorizing civilians, raping women, and torturing children. During these last two years, the free world expressed its deep sorrow for the Syrian people as well as decried its outrage against Assad. There is nothing more befitting a eulogy for Syria in a funeral than what the free world has offered the Syrian people in its lack of commitment to save the country.

The West refusal to arm Syrians in any meaningful way to stop the death and the destruction will neither be forgotten, nor bring any more comfort to those believing in the art of hibernating from their responsibilities. We question which one is a bigger tragedy: Syria’s fate under Assad or Western apathy.

What use is a self-imposed arms embargo on Syria the West cannot enforce a mutuality against Russia and Iran? This policy is a eulogy for Syria.

Applying the Mutual Assured Destruction doctrine against Syrians not receiving weapons when Russia and Iran entitle themselves the dubious honor of facilitating human butchery is both shortsighted and foolhardy.

Furthermore, abandonment of one’s responsibilities just when Arab blood soaks the streets doubles the troubles ahead for the US; wit how abandonment has effectively roared its ugly face in the form of established applied Sharia in eight of the fourteen Provinces of Syria.

The same policy makers who believed distance is a highly valued safety measure that can protect a country tugged between two vast oceans are the ones today basing wholesale policies on this erroneous telemetric by relying totally on self-cordoning and self-absorption. Much smarter men and women used to say, “We must take the fight to them” in lieu of today’s who sit like ducks in the hope the security net they built can withstand the onslaught. By “them”, we mean the Syrian and the Iranian regimes. Unlike many who believe Jihadism is like finding Truffles for it grows below the surface and out of sight, we say look at Syria and watch Jihadism grow like tomatoes in a hot summer. Not just grow but also blend with the social landscape, which essentially fogs the lines separating friends from foes. Beltway Bandits rejoice because the new weapon to defend against the violence of extremism are layers of bureaucracy and less common sense.

Inevitably, men with true calling to Islam will find it convenient to apply their energies and supreme beliefs to tame and submit the West during our eulogy for Syria. Iran does it daily by threatening to destroy Israel and Jihadists in Syria have already, as David Schenker’s article “Israel’s Next Front: Syria” mentioned, turned towards threatening Western values and domains. To these people, Spain was a spoof because Islam is borderless. We Muslims say Prophet Mohammad is the last Prophet who came to fix the wrongs of the other religions and to unite all people under Islam. We were taught this in a liberal Syria at an early age long before “Jihadism” and “Islamist Terror” became words.

The clash between Islam and Christendom is a perpetual clash with waves of vicissitudes. Foolish are those who believe President Obama‘s speeches to the Muslim world to appease the fears of Muslims will protect America. They will discover soon that speeches and abandonment are exactly the recipes Jihadism nurtures itself upon, and as we enter in this new era of expansionist Islam, the West will do well to remind itself that Rome was eventually defeated when it ceased to defend its far away protectorates from the onslaught of the Germanic invasions.

The Muslim civilization has not mastered the value of time yet. When nanoseconds matter in America, in Muslim countries, time stands still to accommodate our own commitments for a better world under Sharia. In some corners of the Muslim world, a season remains a clock by which foods are stored or lambs are birthed. Within this framework of disregarding the most valuable of commodities, imagine then the patience Muslims are born with. Imagine for a moment two frames on a screen where one sees mobility and action on one side but stillness and imperturbability on the other side. Just as if someone is waiting to pounce.

To the men and women who work tirelessly to protect America from harm’s ways, there are no better people any society could wish for as their shields. Their sleepless nights and their heroic work, much of it the public will never find out about, is not bulletproof though because of the laws of probabilities. When America cocoons, it exposes herself to danger at home the laws of probabilities will not be merciful enough to stop and all abandonment of the Middle East region to Islamism does is focus the unperturbed and provide a sense of false security to the cocooned.

Not intervening in Syria to oust Assad expeditiously early on, which would not have oxygenated Islamist fundamentalists, may yet be the kind of mistakes that could spark World War III.

May the people of America and the people of Syria find peace and security working together rather than abandoning each other to our common enemy of extremism and fundamentalism.