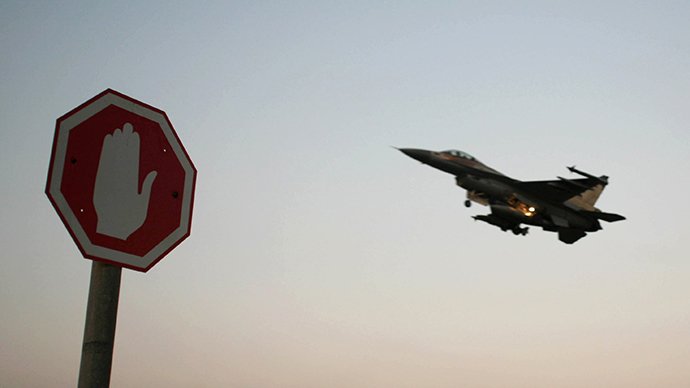 Arm the Rebels, Deploy a No-Fly, No-Go Zones to Protect the Minorities

Politicians often mask their real intentions when opportunistic situations present themselves to resolve problems that have national higher priorities. In our opinion, the US should arm the rebels, deploy a No-Fly, No-Go Zones to protect the minorities. Otherwise expect terror to become the norm in the region.

Hypothetically speaking, if President Obama believed Iran is willing to negotiate to safeguard Assad from Western arms shipments to the rebels in return for more inspections or even dismantlement of its nuclear program, then the President may grab this opportunity because it serves a higher national priority than civilians being massacred in Syria do. Of course, this hypothesis ignores the fact Iran will not honor any western terms.

The problem with assessing priorities on a case-by-case basis is the total disconnect this administration has in the piling-up of other national security predicaments that should force the priorities to change.

No better example than the announcement by Mr. Obama, while on travel at the G8 Summit, that the US will be negotiating peace with the Taliban at a time when Sunni terrorists, in a neighboring country in Pakistan, are attacking Shia Mosques.

To highlight the issue of forced but leverage-free peace negotiations Secretary Kerry is pushing for (Palestinians with Israel, Assad with rebels, and now Taliban with the US), the Taliban killed four US soldiers hours after Obama’s announcement, which demonstrates amply the US cannot come to grip with the notion her enemies want wars, not peace.

Just as Iran and Assad seek wars on their own terms, never peace; and that is why Hezbollah is hibernating when it comes to attacking Israel because her terms have not been met yet. I would even say delayed indefinitely because of Israel deploying the Iron Dome. When Assad says “We will respond in due time”, he means, “We will respond when the terms are in our favor”. Sleeping terrorists are like a receding cancer, they should not be forgotten or forgiven. That is our biggest mistake dealing with Assad. Do arm the rebels.

Obama’s priority is to curb Iran’s nuclear ambitions when the top priority should be to curb terror, especially the new sectarian terror upon us, courtesy of Assad, to blanket Muslim lands.

And if faced by a choice between two terrors, as is the case in Syria, the priority should be to use the weaker side to defeat the more lethal one, especially when the weaker side still retains fast disappearing moderate elements.

In the case of Syria, defeating Assad who is able to command hundreds of thousands to spread terror, just as his family did over the last 43 years, should be a higher priority than defeating the 6,000 Jihadists because those 6,000 will slowly turn into silent millions if Assad wins the battle for Syria. Then, no one will be safe anymore. Do arm the rebels.

To win in Syria, there have to be two policy changes.

What good is peace with extremists if extremism flourishes as a result or worse yet, it grows exponentially occupying a larger footprint geographically while we all believe we are safe playing a round of 18 in some paradise?

If you believe, after we allowed Assad his sectarian war, the Sunni or the Shia extremists hate America now more than they hate each other, you are in for a grand Muslim July 4 with pestilential surprises.

If you believe the west will be sheltered from mutually destructive sectarian wars both sides will blame you for, you are more comatose than a Kevorkian patient is.

People do not realize the destructive forces of Assad and Iran, but now that Assad sparked the sectarian wars aimed at threatening the west, it is high time to remove this cancer. Arm the rebels.

You have been warned of the big picture.

Arm the Rebels, Deploy a No-Fly, No-Go Zones to Protect the Minorities