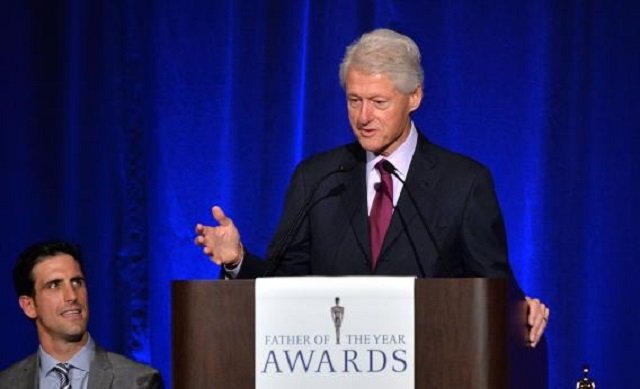 During the annual conference of the Global Clinton Initiative, President Clinton used the opportunity to parade Obama’s weakness on Syria by making a semi-private comment that resonated among an ever-increasing numbers of American and European experts who believe Obama is mishandling Syria. This is an Obama-Clinton Benghazi tour de force when President Clinton said:

“You just think how lame you’d be… suppose I had let a million people, two million people be refugees out of Kosovo, a couple hundred thousand people die, and they say, ‘You could have stopped this by dropping a few bombs. Why didn’t you do it?’ And I say, ‘because the House of Representatives voted 75% against it?’” Clinton said. “You look like a total wuss, and you would be.” (via DB)

—“If you refuse to act and you cause a calamity, the one thing you cannot say when all the eggs have been broken is, ‘Oh my god, two years ago there was a poll that said 80 percent of you were against it.’ You look like a total fool,” Clinton said.

This delivery, with Senator McCain present, took place on June 11, 2013.

Two days later, on June 13, Ben Rhodes, Deputy to the National Security Adviser, posted a new statement on the White House website confirming that Assad has used WMD to attack the Syrian people. Selected portions from the statement read:

After this statement, which made the news across all the major networks and beyond, the US authorized new and direct delivery of weapons to the rebels.

On June 21, eight days after this apparent shift in policy, the Washington Post wrote that the rebels just received a fresh supply of heavy weapons. As a result of an Obama-Clinton Benghazi tour de force we might add.

In order not to appear as though President Clinton is leading the charge, the Boston Globe published an article in which it quoted Obama officials as saying that the decision to arm the rebels was made weeks ago.

But U.S. officials said that the determination to send weapons had been made weeks ago and that the chemical weapons finding provided fresh justification to act.

Further, President Obama himself denied that there is a change in policy on Syria in an interview conducted by Charlie Rose on June 16 (The interview is so laced with deception, evasive answers, and misconceptions, it is really worth viewing. 90% is untrue).

Is Obama’s nature to look weak, then weaker in explaining his weakness, or is there a Benghazi story here that the Clintons are indirectly waving to marginalize Obama while he is still President in preparation for 2016? What better way to pay back Obama for his Celestial 2008 appearance that robbed Mrs. Clinton of her chances to become the President while promoting Clintonia on his own dime and mistakes?

Call us paranoid, conspiracy fools, but there is no higher fun than trying to connect political dots.