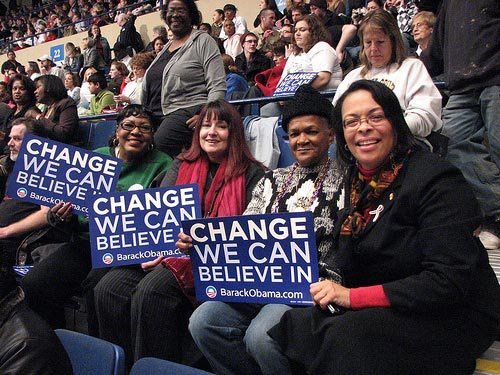 In one of the scenes in the film “The Sounds of Music”, Julie Andrews gathers the children around the bed and sings for them “My Favorite Things” to calm their nerves upon hearing the thunder outside. The dumb Obamacans nervous bunch.

In a much similar fashion, the Obama Administration has been singing a tune to its supporters to calm their nerves that goes along this comment published in The Times of Israel to respond to a Blog I wrote about Obama entitled “Is Obama beyond recall” Here is the comment.

Obamacan could very well be a member of the Assad Syrian Electronic Army roaming websites to demean anyone who threatens their barbaric leader or their supporters, in this case Barack Obama. Only the technology department of the Times of Israel is able to determine the legitimacy of this comment.

Let us just assume though the above comment is legitimate and was written by an Obamacan.

His defense of Obama stands on the grounds our President is saving us from World War III. Let us look closely at this daring concept.

OBAMA MADE THINGS MUCH WORSE

When President George Bush left office, the only terror America had to deal with, which President Bush kept in check by flexing America’s muscles when he needed to, was the Axis of Evil terror. Al-Qaeda was dissolving, Hamas was a tiny threat more concerned about humanitarian ships than missiles and tunnels, and Putin was playing Monopoly with his cohorts.

Fast forward to today’s world affairs to see how much danger America is facing with Obama as our President.

We are not done yet because we still have some 30 months of Obama when anything can happen to threaten America; yet, the dumb Obamacans are focusing on Israel.

In fact, I think by threatening Israel, Obama is saving the world from Khamenei just as Chamberlain saved Europe from Hitler. I would even go as far as saying Obama’s successes are eclipsing Chamberlain’s successes in that department.

The comment above, to a certain extent, shows that I was right about Obama because his supporters are Jew hating Millennials who are mostly clueless about history and politics.

AMERICA IS IN TROUBLE

The dumb Obamacans are lapping this WW III rhetoric like a kitten laps fresh milk. No wonder the United States is in trouble. No wonder everyone is nervous except Obama’s ardent supporters who cannot wrap their brains around the notion that not being George Bush does not mean America is safer or better off. These Obamacans will follow their leader to the abyss no matter how tragic his policies are.

Should you somehow dare to question the audacity of Obama’s weakness as a leader or criticize him in any way possible, you are labeled a racist. Hiding behind the racist card displays the same attributes of weakness we all see in Obama.

I do not know about you, but I am starting a new petition in support of a third term for Obama to thank him for his vigilance over our security and safety.

For sure, America is much safer than ever before, especially now that we have to deal with dumb Obamacans telling us that their leader is saving us from WW III.

I truly miss George Bush and Dick Cheney. Don’t you?