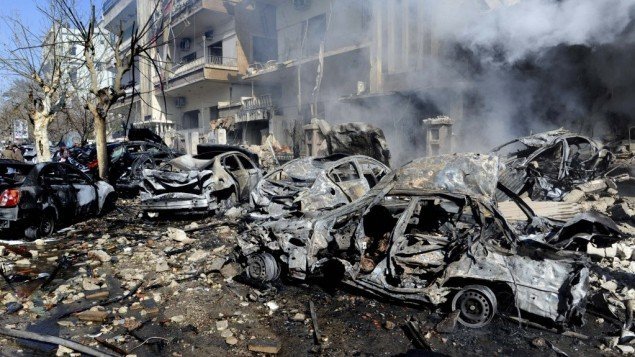 October 27, 2013 8:09 pm 0
Sunnis and Shia Can Build Syria Together
The Serengeti terror migration
Message to the CIA: When the Attack Dog is at Your Throat, Don’t Fiddle with his Cage Key

BEIRUT, Lebanon – A suicide bomber detonated a truck filled with propane tanks at a crowded military checkpoint in central Syria on Sunday, killing more than 30 people, most of them civilians, in the second such attack by fighters linked to Al Qaeda in two days.

The attack, which was reported both by the state-run news media and by antigovernment activists, shook the city of Hama, ignited dozens of cars and sent up a column of smoke visible for miles around. One activist said the secondary explosions of bursting gas tanks had continued long after the initial blast.

Activists said the Nusra Front, one of the two Qaeda affiliates fighting alongside the rebels who seek to topple Assad, was responsible for the attack.

The bombing followed a similar attack that killed 16 soldiers east of Damascus the day before, suggesting an increasing reliance on suicide attacks to try to break government strongholds that the rebels are unable to take by conventional means.

But the high civilian toll on Sunday worried antigovernment activists, who said it could lead to tensions between rebels and their extremist allies.

The rise of extremist groups, which many rebels accept as battlefield companions even while disagreeing with their ideology, is one of the major challenges to international efforts to push for a negotiated end to the civil war. More than 100,000 people have been killed in Syria in two and a half years of conflict.

For months, the United States, Russia, the United Nations and other major powers have been pushing for peace talks to be held in Geneva between the government and the opposition. But dates for the talks have been delayed repeatedly.

On Sunday, the secretary general of the Arab League, Nabil al-Araby, suggested to reporters in Cairo that a conference would be held in Geneva on Nov. 23.

But the joint United Nations-Arab League envoy for the Syria conflict, Lakhdar Brahimi, said at the same news conference that dates had yet to be set.

Mr. Brahimi said he would soon travel to Qatar and Turkey, which support the rebellion, and Iran, which backs Mr. Assad, as well as meet with American, Russian and other international officials before official dates could be set.

So far, each side has insisted on conditions that the other side rejects. The government has said it will not negotiate with “terrorists,” while dismissing almost all who oppose it as such.

The opposition has demanded that the talks remove Mr. Assad from power. The government’s opponents are also hampered by internal divisions and by a widening gap between the exile political leadership, known as the Syrian National Coalition, and the hundreds of rebel groups fighting inside Syria, many of which have rejected the coalition.

Driving the wedge deeper between the two is the Qaeda affiliate, the Nusra Front, which is shunned by the coalition but accepted by many rebels as a valuable ally against Mr. Assad’s forces.

Sunday’s attack, carried out by a Nusra bomber, struck a military checkpoint on the edge of the city of Hama, next to a mechanization office belonging to the Syrian Ministry of Agriculture.

A local activist, Zakariya Attiya, said via Skype that the military had turned the office into a base and ran a checkpoint on the road that searched all cars entering and leaving the city.

“That place was well known by all as the base from which they launched their operations in the area,” Mr. Attiya said. “They detain and torture people there.”

Mr. Attiya said the Nusra Front had carried out the attack because the rebels, who have taken over towns in the surrounding countryside, lack the military might to challenge the government’s grip on the city. While other rebels in the area do not use suicide bombers, they do not complain if Nusra does, as long as they target the government.

But the high civilian toll disturbed many in the opposition.

The Syrian Observatory for Human Rights said 43 people had been killed, at least 32 of them civilians. The group supports the opposition and tracks the conflict from Britain through a network of contacts on the ground.

Syria’s state news agency, SANA, reported the death toll as 37, but did not say any soldiers were killed.