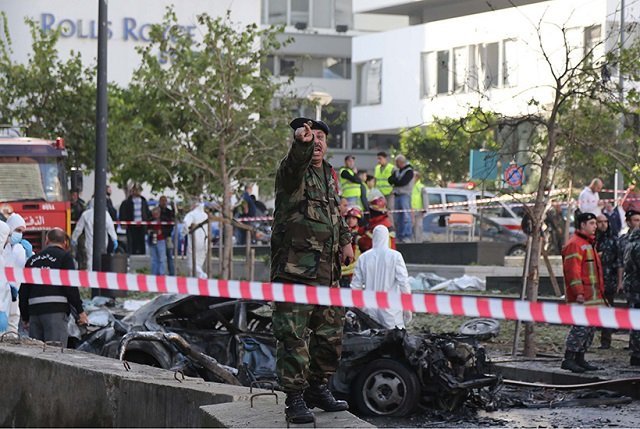 If Israel Makes Arabs Mad at the U.S., Our Partnership With Iran Will Make Them Even Madder

January 9, 2014 7:06 am 0
A slipper and a Tweet may save Syria
Is Assad Recruiting al-Qaeda Again?
The Non-Punishable Terror of Car Bombs

Source: Tablet Magazine – by Lee Smith (If Israel Makes Arabs Mad at the U.S., Our Partnership With Iran Will Make Them Even Madder)

Some in Washington are starting to examine whether President Obama’s inaction in Syria and withdrawal from Iraq is responsible for a wave of bloody sectarian violence pitting Sunnis and Shiites against each other across the Middle East—from Beirut to, now, Baghdad. In reality, it’s exactly the opposite: The White House is indeed responsible for the current Arab civil war, in which the United States is widely portrayed as having teamed up with Iran to kill Sunnis, but not via inaction. It was, instead, deliberate.

It seems like it was only yesterday that the best and the brightest of the U.S. foreign-policy establishment were arguing that the Shia and the Sunnis should duke it out among themselves. White House Chief of Staff Denis McDonough thought that “a fight in Syria between Hezbollah and al-Qaida would work to America’s advantage.” The down-market version of this was Sarah Palin’s notion: “Let Allah sort it out.” But American policymakers have shown little ability to win wars decisively over the last few decades, never mind engineer a carefully calibrated tie. With the Geneva deal, choices were made, including the decision to side with America’s Shiite negotiating partner against the Sunnis.

It doesn’t take much experience in the Middle East to see how locals understand the news. Iran and the United States, the New York Times reports, “find themselves on the same side of a range of regional issues surrounding an insurgency raging across the Middle East.” And what’s drawn them together? Their “mutual opposition to an international movement of young Sunni fighters, who with their pickup trucks and Kalashnikovs are raising the black flag of al Qaeda” across the Middle East. In other words, Obama has teamed with Iran to face down what one analyst described as “the strategic equivalent of a Los Angeles street gang.”

In Iraq, Tehran openly says it’s willing to help the Obama Administration, which is sending heavy arms to Prime Minister Nuri al-Maliki to put down a resurgent al-Qaida. In Lebanon, the White House supports the Lebanese Army, an institution so heavily penetrated by Hezbollah that Saudi Arabia recently pledged $3 billion in the hopes of weaning it off of Iran. Regarding Syria, Secretary of State John Kerry says Iran might help broker peace between the warring sides. “It may be that there are ways that could happen,” he said recently. Kerry’s aim was to soften U.N. opposition to including Iran in talks that are ostensibly aimed at toppling Iran’s chief regional client, Syrian President Bashar al-Assad, who has already killed hundreds of thousands of Sunnis.

In other words, the long-hoped-for historical reconciliation between Washington and Tehran means that America has turned on its traditional allies among the Sunnis. The problem with this strategy is not just that the White House’s tilt against the Sunnis will further empower the most radical elements of that community. By siding with the Islamic Republic of Iran and Hezbollah, the Obama Administration has empowered extremists from both sects while moderates are either sidelined or slaughtered.

Perhaps the best place to consider the effects of the White House’s choices is Lebanon, where a former finance minister, Mohamad Chatah, was killed in a massive car-bomb explosion two weeks ago. Chatah was murdered a stone’s throw from where his former boss, the one-time Prime Minister Rafik Hariri, was killed in February 2005 and almost certainly by the same people indicted in Hariri’s murder—Hezbollah.

Like Hariri, Chatah was widely considered to be a “moderate.” His death, along with those of other Lebanese Sunni officials and leaders over the last few years, has given rise to the concern that the vacuum left by the absence of moderates will soon be filled by radicalized Sunni extremists. But it is only by failing to account for the role that Shiite extremists play in the process—by killing even Sunni leaders with impunity—that it is possible to argue that any Sunni who seeks to defend himself or his community is on the verge of becoming al-Qaida.

The problem for the Sunnis is that Iran’s and Hezbollah’s messaging campaign dovetails perfectly with Obama’s foreign policy. Al-Qaida has been the focus of Obama’s Middle East worldview since he first came to office. With the drone program and killing Osama Bin Laden, Obama has shown his bona fides as a can-do hawk—at least when it comes to targeting nonstate actors in the killing fields of Somalia, Yemen, and Afghanistan. But actual nation-states, even ones that have a history of killing Americans, like Iran does, get a pass—or an interim deal over their nuclear weapons program, along with tens of billions of dollars in foreign investment from eager Western trading partners.

According to the Iranians, they feel threatened by the Sunnis, journalist and longtime Middle East hand Robin Wright told Charlie Rose earlier in the week. She’s just back from a trip to Tehran, where the regime is likely confident that U.S. journalists can convey messages to its new American partners without Iranian mediators. Just last week the Islamic Republic recalled Hassan Rouhani’s friend Seyed Hossein Mousavian from Princeton where, one wag tweeted, the “Iranian envoy to gullible U.S. academics” had finished his tour of duty.

This skillful pro-Iranian information campaign has greased the wheels for the administration’s new twin-pillar policy of fighting al-Qaida while buddying up to Iran by pushing two different lines to American policymakers and pundits. First was the idea that Iran is a natural U.S. ally where Saudi Arabia is not. Sure, the clerical regime is a problem, but eventually the mullahs will fall into the dustbin of history, and the entrepreneurial, technological and democratic energies of an Iranian population sitting atop a civilization thousands of years old would be unleashed. The problem with the argument of course is that it also applies to Saudi Arabia, unless you believe that Persians are somehow innately more capable of modern behavior than Arabs: If you toppled both the clerical regime in Tehran and the royal family in Riyadh, leaving only the two peoples, it is unclear why the Persians are naturally a better U.S. ally than the Saudis.

The second step in the propaganda campaign was to lump in the Saudis (and virtually any Sunni in Lebanon, Iraq, and Syria, who thought to defend themselves against Shiite extremists) with al-Qaida—a terrorist group that killed Americans on U.S. soil. Here the Iranians were pushing on an open door since American antipathy, or hostility, to Saudi Arabia stretches back to at least the 1973 energy crisis and culminates in the Sept. 11 attacks, when 15 of the 19 hijackers were Saudi nationals.

At this point it becomes a matter of math and geography—sure, Iran and its allies have plotted terrorist operations directed at U.S. targets; and yes, the IRGC has killed American soldiers, sailors, Marines, diplomats, and civilians in Lebanon, Iraq, Afghanistan, Saudi Arabia, and other Gulf Arab states, as well as acting against U.S. allies throughout the region, especially Israel. But who’s killed more Americans in America? Al-Qaida. So, why not team up with Iran to tackle a common enemy?

Perhaps there are also theoretical reasons for perceiving al-Qaida, rather than Iran, as the real threat. After all, as a concatenation of nonstate actors, al-Qaida is not susceptible to the arsenal of diplomatic, political, and military techniques that allow the United States to engage with or deter and contain a real nation-state like Iran. However, it is precisely because Iran is a sovereign state with borders, national institutions like a military and intelligence services, and vast energy resources that it poses a strategic threat. And oh yes, there’s also the nuclear weapons program.

Acting on the idea that al-Qaida is the real Middle Eastern threat to global U.S. interests may turn out to be the greatest blunder in the history of modern U.S. foreign policy. Had the policy establishment similarly misread WWII, Western Europe might still be under Nazi rule. Had we thought in the 1970s that, say, Palestinian gunmen running rampant in European airports posed a greater strategic threat to American interests than the Soviet Union, we would have lost the Cold War. It is hard to imagine the logic by which rag-tag, black-flag-waving militias in pick-up trucks armed with AK-47s are more dangerous to American citizens, interests, and allies than a proven state sponsor of terror with a nuclear bomb.

For decades we’ve heard how the Arabs hate America because we support Israel—even as we continued to fund and protect Sunni governments from Riyadh to Cairo. In the post-Geneva Middle East, we’ve now cast our lot with Iran against those former allies, and so it may be only a matter of time before the Sunnis decide to exercise their newfound grievances. If the Arabs were mad at America because of our support for Israel, wait till we get a taste of how they feel about our newfound partnership with Iran.

If Israel Makes Arabs Mad at the U.S., Our Partnership With Iran Will Make Them Even Madder