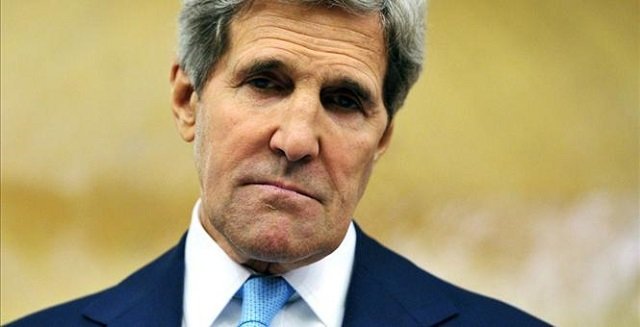 U.S. peace talks on Syria over before start?

The main rebel alliance will boycott the talks set to begin Nov. 23 if the goal is not the end of the regime. Secretary of State John Kerry is working to bring together rebels and Assad in Geneva.

A Syrian opposition group fighting to overthrow the regime of Bashar Assad said Monday that peace will not happen unless the focus of the talks shifts to ending Assad’s rule and trying him for war crimes.

Secretary of State John Kerry has been working with his Russian, Chinese and European counterparts to bring together Syria’s rebels and Assad for peace talks set to begin Nov. 23 in Geneva.

The spokesman for the main rebel alliance says the rebels will boycott the talks if the goal of the meeting is not the end of the Assad regime.

“We want this bloodbath to end, but we want a clear guarantee this Geneva II will end the war in Syria, that Bashar al-Assad will have no future in Syria or any kind of solution,” said Louay Mokdad, spokesman for the Supreme Military Council, which seeks to establish democracy in Syria and includes brigades that seek an Islamic state and others that don’t. “We want clear guarantees he will step away and that the people who killed the Syrian people will face justice and the law, including Bashar al-Assad.”

Mokdad said world powers working to organize the talks must agree beforehand that Assad will leave and face justice as part of any solution.

The State Department’s point person on the Syrian peace process, Robert Ford, “believes there is no military solution for Syria,” State Department spokeswoman Jen Psaki said. Having the Syrian opposition at the Geneva talks is important, and “we’re still looking at having it in November,” Psaki said in Washington Monday.

A boycott of the talks by rebels would be a blow to the Obama administration’s strategy for ending the conflict, which the United Nations says has killed more than 100,000 people.

Kerry announced during a news conference in May with Swedish Prime Minister Fredrik Reinfeldt that the Syrian government and the rebels, including the chief of staff of the Free Syrian Army, has agreed to peace talks.

The Free Syrian Army is the collection of ex-Assad officers and others who are fighting Assad but it does not have control over several other Syrian brigades and foreign fighters allied with al-Qaeda.

Kerry has said that any political solution must include Assad’s departure from power and that such a solution be negotiated with Assad. Assad has said he would be willing to attend the peace conference but has no intention of stepping down.

Earlier this month, Assad said he intends to run for re-election when his term ends next year.

Assad has allied with Iran and the terrorist group Hezbollah to crush a rebellion that began as peaceful demonstrations against his rule. The uprising has become a nationwide civil war that is dragging in fighters and backers from the Middle East, including al-Qaeda terrorist outfits that seek to make Syria a base and Islamic state.

The rebels are being supported and organized with help from the Arab monarchies of Saudi Arabia and Qatar, both of which see Iran as a threat to their regimes.

In seeking a negotiated solution, the United States is backing the Syrian National Coalition, a political group established outside the country that says it wants to create an inclusive and democratic Syria. The SNC works with the Supreme Military Council, a group of rebel military leaders fighting Assad’s forces.

Al-Qaeda-linked extremists, led by Jabhat al-Nusra and the Islamist State of Iraq and al-Shams, have fought alongside Syria’s other rebel forces. Saudi Arabia, Qatar, the United Arab Emirates and Turkey have helped funnel weapons to these factions.

Several fighter units in Syria, including some nominally under the Free Syrian Army, announced recently that they have split from the SMC to form a new battle coalition called Jaish al Islam (Army of Islam). The Army of Islam said it pulled together rebel units that are committed to making Syria an Islamic state in which Islamic law is the sole source of legislation.

Mokdad said the development does not mean that the groups under the Army of Islam banner are leaving the Syrian Military Council. He said they agree with the SMC on a democratic Syria but don’t agree on the way the Syrian National Coalition is pursuing peace talks.

Mokdad said the new group wants “a clear guarantee Bashar Assad will step away and the people who killed the Syrian people face justice.”

“No one inside Syria supports Geneva II,” said Badawi al-Mugarbil, a 33-year-old activist in a-Raqqa. “How will the rebels and the murderer sit on the same table, while blood is still being shed all around Syria?”

However, the incident highlights the difficulties the opposition has faced in presenting a unite front. The SNC has not always stood side to side with the on-the-ground insurgents currently fighting against the Syrian military, who belong to a wide variety of groups with differing goals and ideologies.

“It’s hundreds of rebel groups, and they all have their own policy on this, so it’s really hard to negotiate in that way,” said Aron Lund, a Swedish analyst who has written several reports on Syrian opposition politics.

It’s unclear what, if anything, would replace the talks should they fail to be held, but many of the rebels do say they are open to some form of negotiations.

“Our main goal is to protect Syrian people and save their blood,” said Ahmad, a 25-years-old spokesman for the Ahfad al-Rasoul Battalions rebel group in North Idlib. “Any political solution along these lines, we are ready to support.”

U.S. peace talks on Syria over before start?