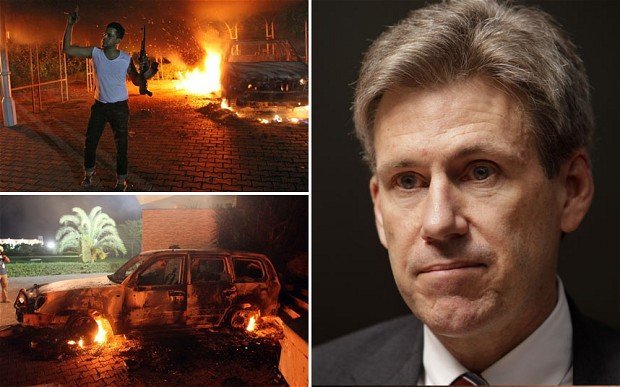 Did Obama Order Benghazi Stand Down?

October 27, 2012 9:47 pm 0
Syria rebels overtake strategic base in south
Why Assad Won’t Last Another Year
About Tensions and Comfort Zones

This story really stinks. Four brave Americans lost their lives because “someone” decided not to order a rescue mission. Did Obama order Benghazi stand down?

From the Bill Kristol Blog comes this CIA announcement and a fact checker.

Breaking news on Benghazi: the CIA spokesman, presumably at the direction of CIA director David Petraeus, has put out this statement: “No one at any level in the CIA told anybody not to help those in need; claims to the contrary are simply inaccurate.

So who in the government did tell “anybody” not to help those in need? Someone decided not to send in military assets to help those Agency operators. Would the secretary of defense make such a decision on his own? No.

It would have been a presidential decision. There was presumably a rationale for such a decision. What was it? When and why — and based on whose counsel obtained in what meetings or conversations — did President Obama decide against sending in military assets to help the Americans in need?

Did Obama order Benghazi stand down?

We can understand Obama not saving any Syrian civilians from the terror of Assad because he is disconnected from Syria and its people; but treating American diplomats with the same nonchalance by refusing to dispatch any military rescue operation to save them is inexcusable and unconscionable.

Also, we don’t buy into the notion that we should not put our military in harm’s way when it comes to defending Americans. If not the military, who then? NY Firefighters? Maybe Michael Moore could volunteer.

Mr. Obama owes the families of the four Americans and the public-at-large a full explanation of who ordered the stand down. If it’s not the CIA and it’s not the State Department or the Pentagon, then who?

Who gave the order to ignore the plight of our people in dire need for a rescue operation?

Did Obama Order Benghazi Stand Down?