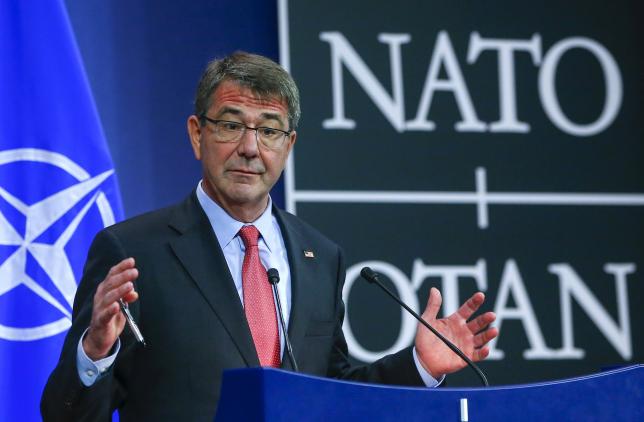 Carter Can Talk ISIL All He Wants

February 12, 2016 5:18 pm 0
When we elect an ignorant president
Obama refuses to provide the Kurds weapons to defend themselves
Iran is leading Obama by his nose

U.S. Defense Secretary Ash Carter said on Friday he expected both Saudi Arabia and the United Arab Emirates to send special operations forces to Syria to help local opposition fighters in their drive to retake the city of Raqqa from Islamic State. Carter can talk ISIL all he wants. Saudi Arabia is not about to enter Syria to defeat an enemy already weakened. Saudi special troops will confront Russian and Iranian terror against Syria’s civilians to stem the flow of Syrian refugees.

Carter, who has long sought greater participation of Sunni Arab allies in Syria, did not disclose how many commandos he expected them to deploy nor the timing of those deployments.

But he suggested they would play a major role taking back Raqqa, the Islamic State’s de facto capital, from the militants.

“We’re going to try to give opportunities and power to … particularly Sunni Arabs in Syria who want to re-seize their territory back from ISIL, especially Raqqa,” Carter told reporters traveling with him in Brussels. Carter can talk ISIL all he wants. Saudi Arabia has other plans in mind.

Carter made the remarks after talks with his UAE and Saudi counterparts on Friday and Thursday respectively.

Four months of Russian air strikes in Syria have helped Syrian psychopath Baschar al-Assad claw back territory from rebels fighting government forces, alarming Gulf Arab states who back the insurgents. And this is why Saudi Arabia, UAE, and possibly Turkey are joining this battle.

Saudi Arabia had concentrated its military efforts over the last year on the conflict in Yemen, where it is leading a coalition of mainly Gulf Arab forces battling Houthi fighters who control the capital, Sanaa.

But it appears to be widening its focus. Carter said on Thursday Saudi Arabia committed to expand its role in the air campaign and the United Arab Emirates said it would restart its participation.

Saudi Arabia and Gulf states took part on Thursday in the largest gathering so far of defense ministers from the U.S.-led coalition against Islamic State, which Carter hosted at NATO headquarters in Brussels.

Carter said the group collectively approved a campaign plan that aims to recapture the two main Islamic State strongholds of Raqqa in Syria and Mosul in Iraq, as well as grappling with the group’s spread beyond its self-declared caliphate.

That plan, however, does not include deployment of large-scale foreign ground forces to Iraq and Syria and Carter stressed that coalition commandos were meant to bolster local forces, not replace them.

The United States has already deployed a small group of special operations forces to Syria and Carter said other allies, beyond Saudi Arabia and the United Arab Emirates, were considering commando deployments.

“Some don’t even like to acknowledge the operations of special forces, but there are a number of them. And we are the organizer of them,” Carter said. Carter can talk ISIL all he wants.

Asked whether the Saudis and UAE were already operating in Syria, Carter said: “No. They’ve had kind of liaisons there … We’re talking about mapping that up.”

Carter Can Talk ISIL All He Wants