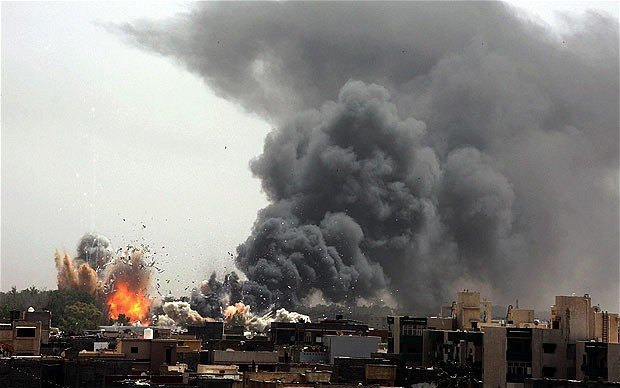 Removing Assad is the Best Way to Defeat ISIL in Syria

Source: The Telegraph – by Con Coughlin (Removing Assad is the Best Way to Defeat ISIL in Syria)

Ever since Syria’s brutal civil war erupted more than four years ago, the one great imponderable for Western politicians has been how to deal with the country’s dictatorial ruler, President Bashar al-Assad.

Early on in the conflict, when leaders who should have known better were seduced by the false promises of the Arab Spring, the prevailing consensus was that the Assad clan’s 40-year tyranny should be brought to an end and replaced by a secular, Western-style democratic government.

It was in pursuit of that goal – as well as responding to Assad’s use of chemical weapons against his own citizens – that David Cameron embarked on his ill-fated attempt in 2013 to win parliamentary approval for air strikes against Damascus. Downing Street shared Washington’s enthusiasm that military intervention would ultimately result in Assad’s demise, as was the case with the 2011 campaign against the Libyan dictator Muammar Gaddafi.

One of the main arguments advanced against Mr Cameron’s plan, though, was that, if the West succeeded in overthrowing Assad, who would replace him? The West might hanker after a Harvard-educated secularist who would uphold such vital Western values as the rule of law and freedom of expression, but the reality was that Assad would likely be replaced by the same Islamist fanatics who terrorised other parts of the Middle East. This, after all, is what happened to Libya after Gaddafi’s overthrow, and there was no reason to believe Syria would be any different.

Since Mr Cameron lost the vote, thereby ending any possibility of military intervention by the West against Assad, a new consensus arose: namely, that keeping Assad in power was the lesser of two evils.

But now it appears this approach is about to undergo yet another review, at least if the briefings given on the fringes of the G7 summit are anything to go by.

According to Downing Street sources, dinner on the final night of the summit at the Bavarian resort of Schloss Elmau was dominated by discussion of the deepening crisis in Syria and Iraq. One of the ideas actively being mooted, apparently, is that Assad will be sent into exile as part of a deal between Russia and the West to combat the rise of Islamic State. As a Downing Street official commented as the summit wound up: “We don’t want to overplay it, but there is a greater sense that a political solution is possible than there has been for many months.”

Several factors explain this sudden change in thinking. The obvious one is the growing realisation that Assad, after his early success in preventing Islamic State (Isil) fighters from penetrating the regime’s Alawite heartland around Damascus, is now very much on the defensive, with reports circulating in the region that the regime could collapse at any minute.

This has focused minds in Western capitals as much as it has in Russia and Iran, the countries that have most to lose if Assad is driven from power. Moscow remains wedded to its long-standing strategic partnership with Damascus, while Iran needs a friendly regime running Syria to maintain its vital supply lines to Hizbollah in southern Lebanon.

If Assad’s fate really does hang in the balance, then it is very much in the interests of Russia and Iran to reach an understanding with the West, whereby Assad’s removal is managed in such a way that prevents the capital being overrun by Islamist militants.

Officially, there seems to be no love lost between the US and Russia. Barack Obama ended the G7 summit by accusing Vladimir Putin, who was excluded over the Kremlin’s illegal annexation of Crimea, of ruining Russia’s economy in his mission to recreate the glories of the Soviet empire.

But behind the scenes, diplomats paint a different picture, one where, so far as Syria is concerned, there is a growing acceptance on the part of both Moscow and Tehran that their interests would be better served by working with the West to reach an agreement that meets their shared objectives: namely, preventing Isil from capturing Damascus.

As one official familiar with the issue commented: “The Russians are prepared to separate their interests in Ukraine from their interests in the Arab world, while the Iranians are desperate to keep their lines open to Hizbollah at any cost, even it if means abandoning Assad to his fate.”

Certainly, the opportunity for the West to indulge in some good, old-fashioned, realpolitik diplomacy is as welcome as it is long-overdue. Today marks the one-year anniversary of Isil’s dramatic capture of Mosul, Iraq’s second largest city, where its fanatical supporters have set about subjugating and terrorising its one million inhabitants in a manner not seen since the Nazi occupation of Europe. Opponents have been subjected to torture and mass executions, and minority sects, such as Christians, persecuted.

But, as Mr Obama conceded at last weekend’s summit, the US and its allies – including Britain – still do not have a “complete strategy” for defeating Isil – which must go down as one of the understatements of the year.

What better way, then, to reverse the West’s dismal record of the past four years than to reach an accommodation with Russia and Iran to remove the Assad regime? With the Syrian dictator out of the way, the task of defeating Isil would be far less problematic. Who knows, it might even prove a success.

Removing Assad is the Best Way to Defeat ISIL in Syria