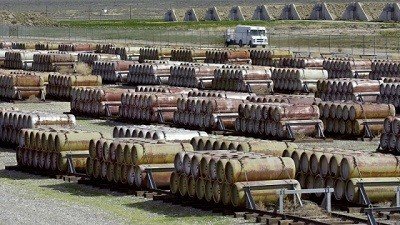 Assad preparing to use Chemical Weapons

Is Assad preparing to use Chemical Weapons anew? He just confirmed it through his Foreign Minister.

In a scathing rebuke of the Obama Administration preparing to assemble a coalition of the willing (Unwilling really) while simultaneously funding, training, and arming (Still have my doubt about the last part) the Syrian opposition, speaker of the parliament Jihad Laham made it clear that the US must align itself with the Assad regime, not the opposition.

What was dangerous about the verbal blast was a statement issued at the same time by the Syrian Foreign Minister Walid al-Moallem to the effect that opposition fighters could use Chemical Weapons in order to blame government forces and create a pretext “for an aggression against Syria and its people.”

Translation? This is tantamount to a threat to use Chemical Weapons against the Syrian opposition the US is about to train and fund. So far, there are no indications any of the moderates or extremists battling Assad or each other possess any weapons of mass destruction. In fact, if we recall, even with the irrefutable proof Assad gassed the Ghouta region outside Damascus, the regime still denied the attack and accused the opposition of gassing its own people.

Since Assad claims he has delivered 100% of its Chemical Weapons, the US State Department published on its website new OPCW concerns over this matter: The press release says in part:

The OPCW report raises serious questions about the Syrian regime’s compliance with its obligations under the Chemical Weapons Convention (CWC) and UN Security Council Resolution 2118 as well as its willingness to continue using chemical weapons to kill or injure the people of Syria.

In the same fact finding mission conducted by OPCW, it discovered that to a “high degree of confidence that chlorine was used as a weapon “systematically and repeatedly” in attacks on three villages in northern Syria earlier this year.”

Given that Mr. Obama has not responded to Assad’s gassing of Syrians in 2013 nor did he respond to the latest Chlorine Gas attacks, the likelihood he will respond the next time Assad attacks again are slim to none.

This reluctance on the part of Obama is as good as a green light for Assad to mass murder Syrians again; something our NSC staff may not realize because of its lack of experience or even worse the leadership of the NSC is ignoring atrocities because of its utter disregard for human life (Do I miss the NSC staff during the Bush era or what).

Since he claims he has furnished all his Chemical Weapons to the international community, it was necessary to deflect guilt elsewhere in preparation of another attack. Therefore, I believe Assad preparing to use Chemical Weapons again and at will.

The US will never have peace of mind as long as Assad is in power (Use of WMD provides the cover necessary under international laws to conduct military operations against his regime), it is just the nature of the regime to terrorize the same way it is the nature of our Department of State to conduct diplomacy.

The day we all realize this fact is the day we begin the process of obliterating the Syrian and the Iranian terror in all its forms, which is backing Hamas today and has created the conditions for the rise of ISIL.

How is that for direct guilt?

Assad preparing to use Chemical Weapons