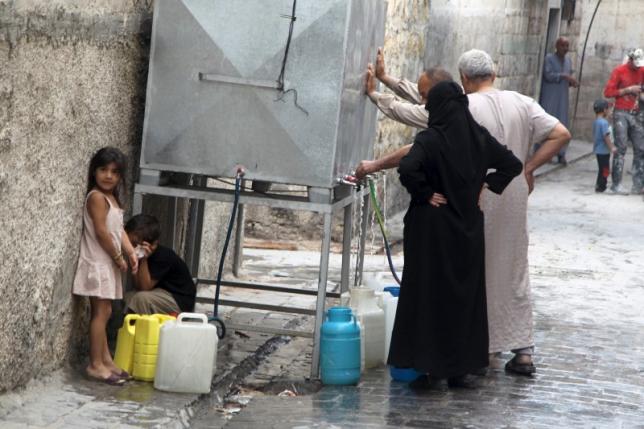 Barbarism Knows No Limits in Aleppo

Through intense bombardment, seeing friends killed before her eyes and living without power, Layana Darwish stuck it out in Syria’s Aleppo through four years of civil war, even completing her degree despite the devastation.

What finally drove her to leave wasn’t the snipers or the bombs. It was the constant struggle to find safe water.

Civilians have borne the brunt of fighting between Syrian government forces and an array of insurgent groups in Syria’s divided commercial capital, a city of two million people where upended buses and cars stacked on top of each other shield residents from sniper fire.

With the city divided between a government-controlled west and rebel-held east, both sides have been able to deprive the other of water, which the United Nations and Red Cross say amounts to using it as a “weapon of war” against civilians. Barbarism knows no limits in Aleppo.

“The water crisis is the catastrophe,” said 28-year-old Darwish, who left government-held Aleppo for Turkey just weeks ago.

“Can you imagine life without electricity? Well, we’ve tried that. We managed to adapt to all kinds of shortages and risks. But water is a different issue – how can you possibly live without it?” she said, speaking to Reuters over the internet.

Residents have resorted to digging makeshift wells, she said. But water drawn from them may be unfit for consumption. Her brother, who drank well water, contracted a kidney illness.

A worker for UN children’s fund UNICEF said cases of typhoid and salmonella had been reported from polluted water.

Fouad Halaq, a volunteer rescue worker in eastern Aleppo, said impoverished families were being forced to choose between purchasing food or clean water.

“A 1.5 liter container of water costs around 75 Syrian pounds ($0.40). A family of six can’t spend this much on water alone, they’ll have nothing left for food,” he told Reuters.

UNICEF worker Maher Ghafari said even bottled water sold by private enterprises was not necessarily safe, but nonetheless families were forming hours-long queues to buy it.

“A little girl waited in line for four or five hours, only to realize that the two gallons she had to carry were too heavy, and she fell over and started crying,” Ghafari said.

Aleppo residents on average have access to running water for only half the month, according to the Red Cross’s Pawel Krzysiek, who spoke from Damascus.

“This is not enough, even if people try to apply contingency measures such as a water tank,” he said. The Red Cross is working to facilitate access to clean ground water, producing online maps so people can locate their nearest source.

But the water crisis is also attributable to tactics by warring parties who intentionally deprive civilians of basic needs, international aid groups say. UNICEF said in August it had recorded 18 deliberate water cuts during the year. Barbarism knows no limits in Aleppo.

Water supply to Aleppo is particularly vulnerable because at various stages of its journey it passes through different areas of control.

The initial pumping station on the Euphrates River is held by Islamic State, while the next pumping station, in the city’s eastern district of Soleiman al-Halabi, is controlled by rival insurgent forces. The final station is in government hands.

Islamic State cut off the supply from the Euphrates for a few days early last year. In July this year, Ghafari said, it reduced the supply to just 40 percent of the usual flow, drastically cutting water supplies for two hot summer months.

Fighters from the Nusra Front, a rival hardline Islamist group, have also exploited their control of Soleiman al-Halabi, cutting off water for three weeks in July to pressure the government to restore electricity, he said.

Barbarism knows no limits in Aleppo.

All the pumping stations depend on electricity supplies which are controlled by the government. While cities across Syria face shortages, Aleppo residents say they often get only an hour of electricity per day – or sometimes none at all.

When there is no power to operate the pumping station at Soleiman al-Halabi, water is often lost into the Quweiq river that runs between it and the final station.

UNICEF is helping install tanks and purification units downstream to save and store that water for collection, Ghafari said.

So far, there is little sign that either the government or the various rebel groups will be able to break the stalemate and assert control over Aleppo to allow normal life to return. Civilians, meanwhile, bear the brunt of the fighting.

Warring sides have dug themselves in and carry out tit-for-tat attacks that kill mostly civilians. As government forces rain barrel bombs on eastern Aleppo, insurgents have responded with shelling on the west.

Of 577 people killed in Aleppo city from January through September, 559 were civilians, monitoring group the Syrian Network for Human Rights said.

Vast areas have been reduced to rubble, with destruction hitting markets and mosques in the UNESCO World Heritage-listed old city.

“Parties in the conflict are apparently taking advantage of this war, and civilians are paying the price,” said Darwish, the refugee. “No one sees hope for a solution.”

Barbarism Knows No Limits in Aleppo

The Significance of the Battle for Aleppo
Failed State Macabre
Russia Ignores ISIS in Aleppo, Concentrates on Moderate Rebels
Radicalism 567