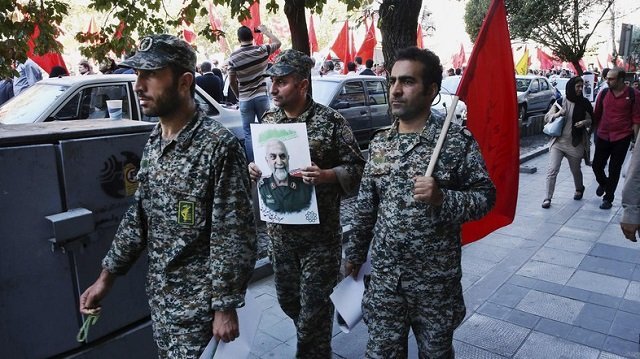 Iran Is Intent on Making Syria its Graveyard

Hundreds of Iranian troops are reportedly being deployed in northern and central Syria, dramatically escalating Tehran’s involvement in the civil war as they join allied Hezbollah fighters in an ambitious offensive to wrest key areas from rebels amid Russian airstrikes. Iran is intent on making Syria its graveyard.

Their arrival, a regional official and Syrian activists told the Associated Press news agency on Wednesday, highlights the far-reaching goals of Russia’s military involvement in Syria. It suggests that, for now, taking on Islamic State extremists in eastern Syria seems a secondary priority to propping up the psychopath Baschar al-Assad.

The development is almost certain to increase pressure on Western-backed rebels, who are battling multiple foes, and push more civilians out of the areas of fighting, potentially creating a fresh wave of refugees heading towards Europe.

This ethnic cleansing campaign aims at displacing million of Sunnis outside the Shiite arc extending from Tehran to Beirut. By design, it is the largest such displacement in human history, and Barack Obama, with his inaction, is complicit in its development.

Russia began its air campaign Sept. 30, and Syrian troops and allied militiamen launched a ground offensive against rebels in central Syria a week later. Russia says its airstrikes are meant to weaken the ISIS and other “terrorists” in Syria, but Western officials and Syrian rebels say most of the strikes have focused on central and northern Syria, where the extremist group does not have a strong presence.

The official, who has deep knowledge of operational details in Syria, said the Iranian Revolutionary Guards – currently numbering around 1,500 – began arriving about two weeks ago, after the Russian airstrikes began, and have accelerated recently. The Iranian-backed group Hezbollah has also sent a fresh wave of fighters to Syria, he told The Associated Press.

Iran is intent on making Syria its graveyard.

Iranian and Syrian officials have long acknowledged Iran has advisers and military experts in Syria, but denied there were any ground troops. Wednesday’s statements were the first confirmation of Iranian fighters taking part in combat operations in Syria.

The main goal is reportedly to secure the strategic Hama-Aleppo highway and seize the key rebel-held town of Jisr al-Shughour in Idlib province, which Assad’s forces lost in April to insurgents that included al-Qaida’s Nusra Front.

The loss of Jisr al-Shughour, followed by the fall of the entire province, was a resounding defeat for Assad, opening the way for rebels to threaten his Alawite heartland in the coastal province of Latakia.

At least two senior Iranian commanders were killed in Syria in recent days, including Gen. Hossein Hamedani, a senior Revolutionary Guard commander, who died Oct. 8 near Aleppo. Iran is intent on making Syria its graveyard.

Iran Is Intent on Making Syria its Graveyard

On Middle East, Donald Trump is a White Barack Obama
Iran Violating Nuclear Sanctions Even as Talks Drag On
Dare We Say It? The Mullahs Must Go
Iranian Terror 594