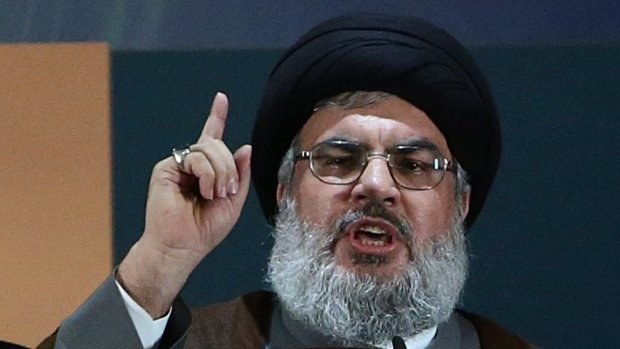 The Syrian opposition said Tuesday that Lebanese Hezbollah leaders should be put on trial for fighting on the government’s side in the Syrian civil war.

The surge in Hezbollah involvement has coincided with a turn in the tide of the fighting in favor of President Bashar Assad’s forces and may be a factor in it.

Also Tuesday, a United Nations delegation tasked with investigating the use of chemical weapons landed in Lebanon on its way for its first trip to Syria.

Hezbollah’s active support of Assad’s forces has fanned the flames of sectarian tensions in the region. The Syrian conflict, now in its third year, is increasingly being fought along sectarian lines, pitting Sunni against Shiite Muslims, spilling over into Lebanon.

The overwhelmingly Sunni rebels fighting to topple Assad see Hezbollah’s involvement as a declaration of war.

“We call for Hezbollah leaders to be put on trial for the terrorist crimes they committed on Syrian territory,” a statement issued by the Western-backed Syrian National Coalition, Syria’s main opposition group, said Tuesday.

The European Union placed Hezbollah’s military wing on its terror list Monday after diplomatic pressure from the U.S. and Israel.

Some European countries pushed for EU action citing a terrorist attack in Bulgaria’s Black Sea resort of Burgas last year that killed five Israeli tourists and a Bulgarian. Hezbollah’s military wing was accused of involvement, an allegation it denied.

Several EU nations have pointed to Hezbollah’s involvement in Syria as further reason for the move.

The opposition group hailed the EU decision but stressed the need for European countries to take “concrete steps that would contribute to stopping the militia’s involvement in Syria.”

Seeking to appease concerns in Beirut, the EU ambassador to Lebanon, Angelina Eichhorst, said after meeting with Lebanon’s caretaker foreign minister that the EU will work with any Lebanese government “even if Hezbollah is part of it.”

Hezbollah and its allies dominated Prime Minister Najib Mikati’s government, which resigned in March. Politicians have not been able to form a new government since.

Syria’s civil war has killed more than 93,000 people and displaced millions. Both sides accuse each other of using chemical weapons in the war.

Swedish chemical weapons expert Ake Sellstrom and U.N. disarmament chief Angela Kane arrived Tuesday in Beirut on their way to Damascus, Lebanese airport officials said. The Syrian government has invited them for talks on the terms of a U.N. investigation.

The Syrian regime accuses rebels of using chemical agents in a March 19 attack in the government-controlled Aleppo suburb of Khan al-Assal. Assad’s government has refused to allow inquiries in other places.

Khan al-Assal fell to the rebels hands on Monday. Even if the U.N. team does get access, it likely will be difficult to find evidence from the attack because so much time has passed.

Robert Serry, the U.N. Mideast envoy, told the Security Council that the U.N. has received 13 reports of alleged chemical weapons use in Syria. He said Sellstrom’s team is studying this and other material.

“There is a growing body of limited but persuasive information showing that the regime has used and continues to use chemical weapons, including sarin,” said British U.N. Ambassador Mark Lyall Grant.

In June, the United States said it had conclusive evidence that Assad’s regime used chemical weapons against opposition forces. That crossed what President Barack Obama called a “red line,” prompting a U.S. decision to begin arming rebel groups, although that has not happened yet.

In Syria, an al-Qaida-linked group warned civilians to stay off a road linking central Syria with Aleppo, declaring it a military zone. Rebels are trying to cut one of the regime’s main routes for supplying its forces in the north, activists said.

The warning came a day after rebels went on the offensive in Syria’s north, seizing three villages in the province where a military stalemate has been in place since last summer.

The Britain-based Syrian Observatory for Human Rights and the Aleppo Media Center said that al-Qaida-linked Jabhat al-Nusra is threatening to target any vehicle using the road starting Wednesday. The warning was posted online.

The regime uses the route to ferry supplies to its forces in the north because the rebels already have severed the main north-south highway that connects Damascus with the embattled city of Aleppo.

Surprising Way Some Syrians Are Protecting Themselves From Snipers
Qardaha Hospital Struck by Suicide Truck Bomb
You Want alQaeda? You Got alQaeda
Iranian Terror 594 Syrian Revolution 1335