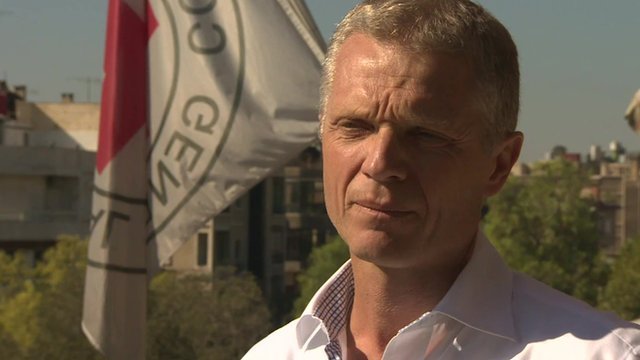 The International Committee of the Red Cross warned Wednesday that thousands of Syrian civilians besieged by government and rebel forces alike were in desperate need of aid. The Red Cross condemns Syria aid blockades.

The Geneva-based humanitarian organisation said in a statement:

“Tens of thousands of civilians in Syria are living in extremely harsh conditions in sealed-off areas, and humanitarian aid is being prevented from reaching them. The consequences could be tragic. Civilians living in areas encircled by government forces or the various armed opposition groups are not receiving regular supplies of food or other basic necessities. To bring them aid it is necessary to obtain the consent of all sides, which can at times be very difficult.”

A major area of concern is the city of Homs, which has seen some of the fiercest fighting since Syria’s war erupted in 2011.

“We have been trying for close to 20 days now to bring medical supplies and other aid to the old city of Homs. Despite lengthy negotiations with both sides, and three trips back and forth between Damascus and Homs, we have still not received the go-ahead from the Syrian authorities. We could help more people in Homs and elsewhere in the country if there were a willingness on all sides to allow us to do so.”

Reaching civilians is the “toughest challenge” the ICRC faces in the Syrian war, the group said, even though the laws of war oblige all parties to a conflict to allow unimpeded passage of humanitarian relief.

There have been some successes, however.

The ICRC pointed to a green light for supplies to prisoners in the conflict-torn city of Aleppo, where there had been reports of an acute food shortage.

“The fact that, over the past two weeks, 5,000 people held at Aleppo’s central prison have been receiving regular deliveries of food shows that constant dialogue with the parties can yield results. Both sides agreed to allow humanitarian work to take place,” said Barth.

So far this month, the ICRC has brought food to 215,000 people in various parts of Syria, working hand in hand with the Syrian Arab Red Crescent.