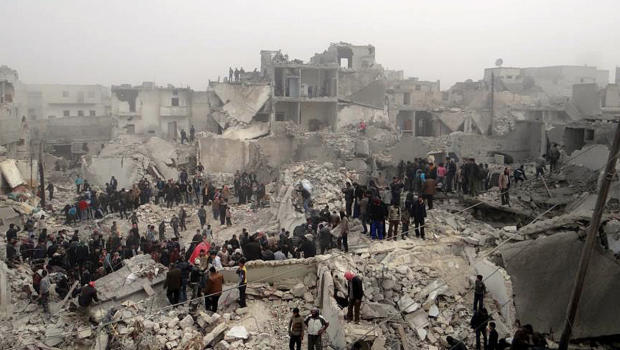 REYHANLI, Turkey?Syrian government forces have nearly encircled Aleppo, preparing a siege to wrest control of the city from rebels in what would be the biggest blow yet to the three-year uprising.

The fall of Aleppo, Syria’s largest city and economic hub before the fighting, could also bolster the ranks of Islamic State militants who continue to make gains across the country, as defeated members of the Western-backed Free Syrian Army switch to their side.

Rebel commanders in Aleppo say they are stockpiling goods as aid groups step up food deliveries?crates of lentils, rice, ketchup and baby formula?seeking to prevent the same kind of mass starvation that forced them to surrender the much smaller city of Homs in May.

Losing Homs, once dubbed the capital of the revolution, was a tremendous blow to the rebels. If they lose the battle for Aleppo as well, it could spell the end of their revolt against the regime of Syrian President Bashar al-Assad, rebel commanders warn.

Regime forces now surround Aleppo on three sides, having overrun the Sheikh Najjar Industrial City in the east last month, and are trying to seal off the last rebel-controlled corridor, a 4-mile-wide access point to the northeast.

Tuesday, rebels and regime forces clashed in Aziza, on the southern outskirts of Aleppo, while government aircraft stepped up strikes on the old city, activists said.

Simultaneously, extremists with the Islamic State, also known as ISIS or ISIL, are encroaching on rebel-held territory north of the city, uprooting the FSA from the countryside.

“We’re about to lose Aleppo and no one cares,” said Hussam Almarie, an FSA spokesman. “We won’t be able to recover the revolution if this happens. And we’ll lose the moderates in Syria.”

Noah Bonsey, a senior analyst with the International Crisis Group, agreed. “The net impact of losing Aleppo will be the withering of the mainstream opposition” in six months or a year, he said.

The Islamic State, a more radical offshoot of al Qaeda, is currently being bombarded by?U.S. airstrikes in northern Iraq. But the White House hasn’t moved against?the group in Syria, its power base.

Regime and Islamic State forces in Syria engaged in their first large-scale clashes over territory and resources in June, although that remains a relatively rare occurrence.

Western officials say Mr. Assad’s government may have been avoiding confrontation with the Islamic State, allowing it to weaken the FSA. If the regime takes Aleppo, it may then turn its full attention to fighting the Islamic State, satisfied with its battlefield position.

But for now, analysts such as Mr. Bonsey say the regime seems content to allow the Islamic State to continue picking off the FSA, despite the hazards.

When the FSA lost Homs after a two-year siege, its fighters withdrew north. Weakened from malnourishment, their ammunition depleted, the Islamic State preyed on them and gave them a choice: join their hard-line movement or die, rebels and activists interviewed said. Many joined.

To stave off a similar disaster, the FSA’s Western and Arab backers are asking the opposition to commit more resources to Aleppo from their strongholds in neighboring Idlib province, rebel commanders say.

The orders are coming from the Military Operations Command in Turkey, where the FSA’s foreign backers, including the U.S., coordinate their efforts.

In exchange for sending reinforcements to Aleppo, FSA rebels have received more ammunition, food and weapons from the command, including the coveted American-made antitank missiles known as TOWs. But the rebels say the increase isn’t enough to change the battlefield situation.

“If a siege happens in Aleppo, it will be the breakdown of the revolution,” said a Syrian official working with the military command in Istanbul.

The Islamic Front, another rebel grouping that the U.S. opposes for its hard-line ideology and some of the factions’ links to al Qaeda, has been stronger in Aleppo city than the more secular FSA.

But the Islamic Front’s resources have dwindled in recent months as the U.S. has reined in Qatar’s support for the coalition, officials working with the military command say.

Some opposition officials believe the U.S. may be trying to gut the Islamic Front or force them to join the FSA by sending only limited supplies to Aleppo as government forces advance.

“Not just the Islamic Front is suffering, but all rebels are suffering from the lack of resources. All those countries that were supplying rebels are tired. The revolution has taken so long,” Mohammed Alloush, a leader of the Army of Islam, part of the Islamic Front, said in a rare interview in Reyhanli.

Aleppo is physically four times as big as Homs, which will make it harder for the regime to seal it off. Yet in many ways, the rebels’ ambitious goal in 2012 to take the city of three million proved to be a curse.

Unlike in Homs and other mostly Sunni Muslim areas, which were generally pro-revolution, Aleppo was a mosaic of religious minorities and wealthy merchants of all stripes, many supportive of the regime.

The fighters needed to secure Aleppo’s pre-revolution population?now reduced to 300,000?and its urban sprawl, which drained their ranks and strained limited resources.

Government forces continued to hold parts of Aleppo and bombard the rebels as they fought among themselves for the spoils, such as the city’s factories or the right to create checkpoints to levy tolls.

Using crudely fashioned barrel bombs, packed with scrap metal and explosives and dropped from helicopters, the regime has destroyed much of Aleppo’s urban landscape, killing hundreds of civilians. The use of barrel bombs has increased recently, Human Rights Watch said in July.

Meanwhile, the revolution’s internecine fighting helped extremists like the Islamic State gain prominence, a pattern that developed across Syria.

Rebels in Aleppo fear a massacre. “ISIS is slaughtering people while the Syrian regime is wiping Aleppo off the map,” said Mustapha Amin, the spokesman of Jaish al-Mujahideen, another rebel group prominent in the city.