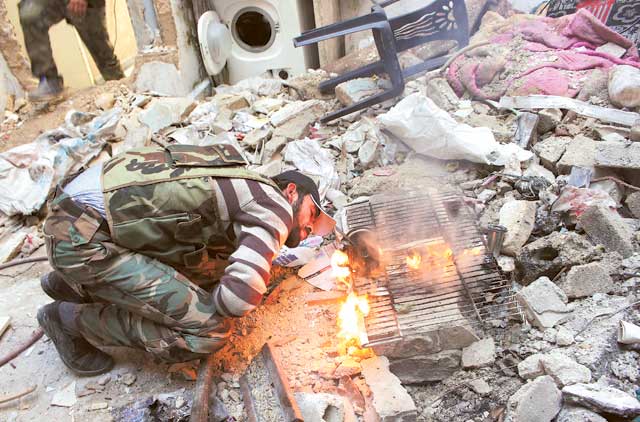 Assad Supporters Feeling the Pinch of Their War

March 27, 2019 2:20 am 0
Deter the madness of Assad
Politics is comedy
Pursuing The Assad War Criminals

A Washington Post article by Liz Sly entitled “Assad loyalists are turning on Syria’s government as living standards deteriorate” details how Assad supporters feeling the pinch of their war. It was a war, after all, that Assad could have avoided. Had the criminal man behind it agreed to power sharing. Instead, he destroyed a whole country for him to stand small over the ruins of Syria.

At TFS, we dubbed Assad the “Rubble Concierge” because he takes orders from Iran and Russia while ruling over his own rubble.

In the article, Sly writes:

But for the first time, those living in the pro-government areas that were spared the worst of the violence are experiencing some of the harshest deprivations, including in the capital, Damascus.

Residents there say life has become more difficult in recent months than at any point in the past eight years, bringing a realization that there will be no swift recovery from the immense damage inflicted by the war on Syria’s economy, social fabric and standing in the international community.

The three evil actors in Syria, Assad regime, Iran, and Russia, are all under straining sanctions. In one form or another. This limits the capacity of Iran and Russia to keep Syria afloat economically through the infusion of capital. Syria’s budget for 2017 was $5.1b when the same budget was $18.3b in 2011 just before the war started. The numbers take into account the Lira’s devaluation vs. the dollar. That’s $18.1b for 23m people in 2011, and $5.1b for 19m people in 2017. Assad supporters feeling the pinch of their war, we say.

Before the war, Assad supporters videotaped themselves chanting “Assad, or we will burn the Balad”. Balad is ‘country’ in Arabic. Now that Syria has burned, we would like to remind Assad supporters and loyalists that the pinch they are feeling is of their own making. You want Assad, we say, you got Assad, we say some more. Enjoy the fruit of your own choices.

THE RUBBLE CONCIERGE STILL AT HIS DESK

When the civil war started in 2011, Syria’s youth, mostly secular, went into the streets to protest the oppressive Assad. A man they never voted for. In return, Assad began killing them. To avoid the appearance that Syrians are clear-eyed pragmatists who want freedom, Assad released all the hardcore Islamists from his jails and empowered them to save his skin from regime change. Meanwhile, he killed off the liberals through extreme barrel bombings and over 200 times of gassing them. Assad needed ISIS to grow and prosper to protect his rule knowing well the world would fight ISIS for him.

Had Assad shared power with the Free Syrian Army instead of spending all his energies on creating an Islamist terrorist opponent, Syria might be quite different today. Closer to Lebanon where all religions co-exist peacefully even though tensions exist under the surface. No different than today’s tensions in America between Trump supporters and the anti-Trump camp.

Now that Assad can claim he won, he is witnessing the results of his own destruction come back to haunt him. More importantly, his chanters have gone quiet. Just like canaries in an airless mine.

Assad Supporters Feeling the Pinch of Their War