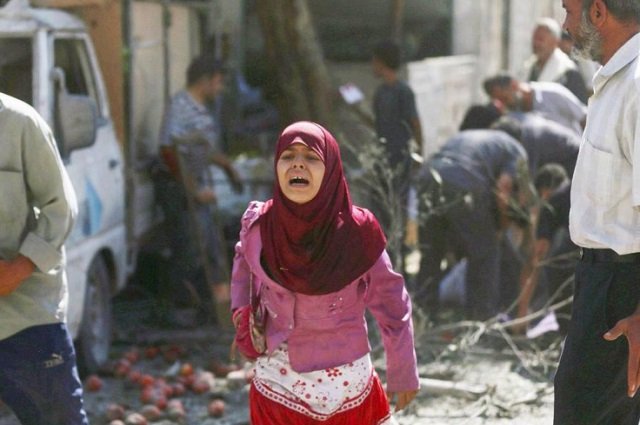 At least 50 bodies were retrieved from buildings leveled to the ground after Assad missiles hit residential areas in the rebel-held northeast of Damascus on Saturday, rescue workers said.

“The world has lost all morale fortitude as it stands by while the criminal Assad regime continues killing civilians with deadly missiles either made in Iran or Russia, both countries that sponsor terror against innocent women and children.”

They said more bodies were believed to be under the rubble of buildings occupied by dozens of families in the city of Douma, about 15 km (10 miles) northeast of Damascus, with dozens of victims taken to field hospitals, many seriously wounded.

Rescue workers said 20 bodies were identified. A further 32 victims remained unidentified and the toll was expected to rise as civil defense workers step up the search amid the rubble of the four multi-storey buildings that were directly hit by the Assad missiles.

“There are entire families still under the rubble. We couldn’t reach them yet, because as you know the process of removing debris must be done with extreme caution,” said Majd, an official from the Syrian civil defense corps, a group which operates in rebel-held areas.

Sunday’s Assad missiles attack on Douma was one of the bloodiest in the four-year-long war that has killed an estimated quarter of a million people and driven 10 million from their homes. The conflict grew out of protests against President Bashar al-Assad in 2011 which were put down with force.

The heavily populated Douma area where at least 250,000 civilians lived were probably hit by ground to ground missiles on Saturday, followed by air raids.