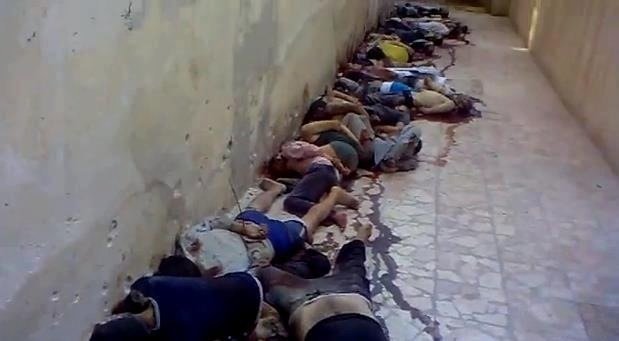 February 3, 2019 10:00 am 0
Syria’s children suffer, and the world just shrugs
Time to Indict Assad of War Crimes in Absentia
From Israel With Love: How Powerful a Magnet Assad Is to Terror

Foreign Policy published an article by Nawaf Obeid entitled “Shame on the Arabs” in which the author blasts some of the Arab regimes for their recent diplomatic rapprochement with the murderous Assad regime. His is about shaming Arab dictators.

Despite these horrific war crimes [Assad’s], it was announced recently that a group of Arab countries has begun normalizing relations with Damascus after they were cut off in 2011, when mass killings and repression became the hallmarks of the civil war. Both Bahrain and the United Arab Emirates announced in late December 2018 that their embassies were reopening in Damascus. Flights between the two countries and Syria are also scheduled to restart soon. In addition, Egypt, Iraq, and even democratic poster child Tunisia have expressed support for Syria’s return to the Arab League.

BIRDS OF A FEATHER

The author also refers to the visit of Sudanese Omar al-Bashir to Damascus, he himself a convicted war criminal, in support of another war criminal. Seeing the two together had one aphasic purpose. To the naked eye, both criminals meeting looks like a statement of sort. It looks like they were asking the world what does it know about their suffering to remain in power. Against all odds. Mind you, Russia assisted Assad, and China assisted Bashir. Without either, those two war criminals would be behind bars.

One of the strongest points Obeid makes in his article about shaming Arab dictators is Europe’s response to genocide as compared to Arabs. He writes:

The Arab approach to Syria and the latest rekindling of ties to Assad typify the incompetence and moral bankruptcy of a dozen of the region’s current rulers.  The root cause of this malaise is the broken ethical compass that has long been steering the Arabs awry.

A comparison between the European and Arab responses to war crimes offers a telling lesson. Pursuing the criminal warlords Ratko Mladic and Radovan Karadzic with vigor following the Yugoslav civil war, the Europeans arrested and deported the butchers of Bosnia and Serbia, had them tried at The Hague for crimes against humanity for massacring Christian Croats and Bosnian Muslims, and sent them to die in prison. How does the Arab response to the genocide of fellow Arab Muslims in their midst compare? The butchers of Sudan and Syria, Bashir and Assad, are parading together gleefully in front of the cameras while the Arabs watch on with complete indifference.

It’s a civilizational and structural difference, or indifference in this case. Arab morality is lacking even though many of these rulers are secure with a dictatorial lifespan stretching throughout many generations. This bazaar mindset, not skin color or geography, is what makes Arab rulers an inferior race. One that has ascended to power, with help from the west, to draw Arabs to be slaves to their oil; rather than masters of Arab potential.

Obeid’s final point about shaming Arab dictators is a gem:

As shameful and misguided as this about-face may be, Arab leaders have justified it on the premise that playing nice with Assad will draw him away from Iran and help curb the country’s malevolent influence in the region.

However, the experience of Lebanon, where Western and Arab Gulf states showered billions of dollars in aid in a quixotic attempt to defeat Iran, shows that such an approach has not worked and will not work.

In other words, it is all about the depravity of these Arab rulers. They stand a hairline away from committing similar atrocities if faced with the same dilemma. The Arab forbidden fruit is a taste of democracy.

We applaud the courage of Nawaf Obeid. As an Arab intellectual who has been exposed to western values, it is clear Obeid claims our kind is heading in the wrong direction. Thanks to Arab rulers and dictators whose morality emulate that of scorpions in the desert.