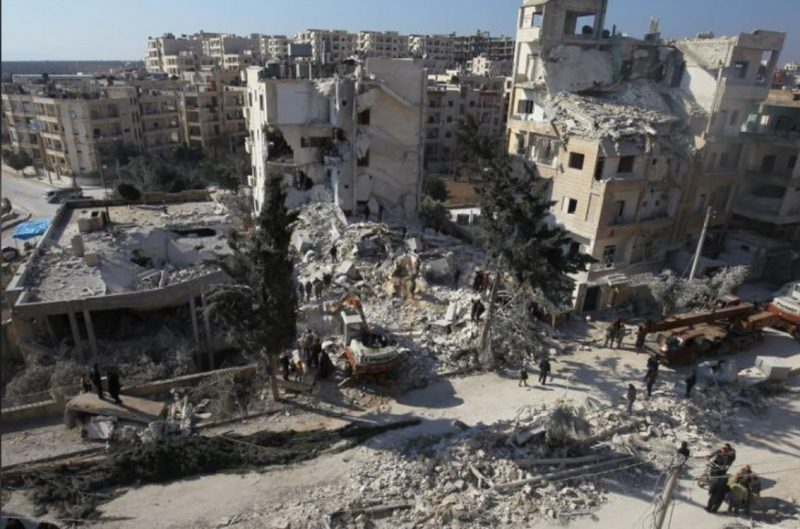 A United Nations security team came under fire in Syria while doing reconnaissance for inspectors to visit sites of a suspected chemical weapons attack, and officials said it was no longer clear when the inspectors would be able to go in. Assad blocking United Nations Douma entry using terror.

This is considered a totally normal behavior after Assad feeling emboldened by the lack of American resolve to stop his madness. Wouldn’t anyone when they know there are no consequences to their action? This one is on Donald Trump for his collusion with Vladimir Putin.

The inspectors from the Organisation for the Prohibition of Chemical Weapons are in Syria to investigate an April 7 incident in which Western countries and rescue workers say scores of civilians were gassed to death by government forces.

OPCW Director-General Ahmet Üzümcü said the United Nations Department of Safety and Security (UNDSS) had decided to carry out reconnaissance at two sites in the town of Douma before the inspectors would visit them.

“On arrival at site one, a large crowd gathered and the advice provided by the UNDSS was that the reconnaissance team should withdraw,” he told a meeting at the watchdog’s headquarters in remarks it later released. “At site two, the team came under small arms fire and an explosive was detonated. The reconnaissance team returned to Damascus.”

U.S. Defense Secretary Jim Mattis blamed the Syrian government for delays in inspectors reaching the sites and said it has a history of trying to “clean up the evidence before the investigation team gets in.”

“We are very much aware of the delay that the regime imposed on that delegation but we are also very much aware of how they have operated in the past and seal what they have done using chemical weapons,” Mattis said before the start of a meeting with his counterpart from Qatar. Assad blocking United Nations Douma entry using terror.

The United States, Britain and France fired missiles at Syrian targets on Saturday in retaliation for the suspected chemical use. They say the arrival of the inspectors is being held up by Syrian authorities who now control the area, and that evidence of the chemical attack may be being destroyed.

Damascus and its ally Moscow deny that any gas attack took place, that they are holding up the inspections or that they have tampered with evidence at the site. Britain’s ambassador to the OPCW Peter Wilson said it was now unclear when the inspectors would be able to reach it.

The rebel group based in Douma announced its surrender hours after the suspected chemical attack, and the last rebels left a week later, hours after the Western retaliation strikes.

The U.S.-led intervention has threatened to escalate confrontation between the West and Assad’s backer Russia, although it has had no impact on the fighting on the ground, in which pro-government forces have pressed on with a campaign to crush the rebellion.

Assad is now in his strongest position since the early months of a seven-year-old civil war that has killed more than 500,000 people and driven more than half of Syrians from their homes. This is why Assad blocking United Nations Douma entry using terror.

The OPCW team will seek evidence from soil samples, interviews with witnesses, blood, urine or tissue samples from victims and weapon parts. But, more than a week after the suspected attack, hard evidence might be hard to trace.

An official close to the Syrian government said the U.N. security team had been met by protesters demonstrating against the U.S.-led strikes.

“It was a message from the people,” said the official. The mission “will continue its work”, the official said.

Douma was the last town to hold out in the besieged eastern Ghouta enclave, the last big rebel bastion near the capital Damascus. Eastern Ghouta was captured by a government advance over the past two months.

Syria’s U.N. ambassador said on Tuesday the fact-finding mission would begin its work in Douma on Wednesday if the U.N. security team deemed the situation there safe.

The Syrian “White Helmets” rescue organization, which operates in rebel-held areas, has pinpointed for the OPCW team the places where victims of the suspected attack are buried, its head Raed Saleh said on Wednesday.

Douma hospital workers who stayed in the town after the army recaptured it have said that none of the people injured on the night of the attack were exposed to chemical weapons.

Medical charities operating in opposition-held parts of Syria have dismissed those statements as propaganda, given under duress now that government forces control the town.