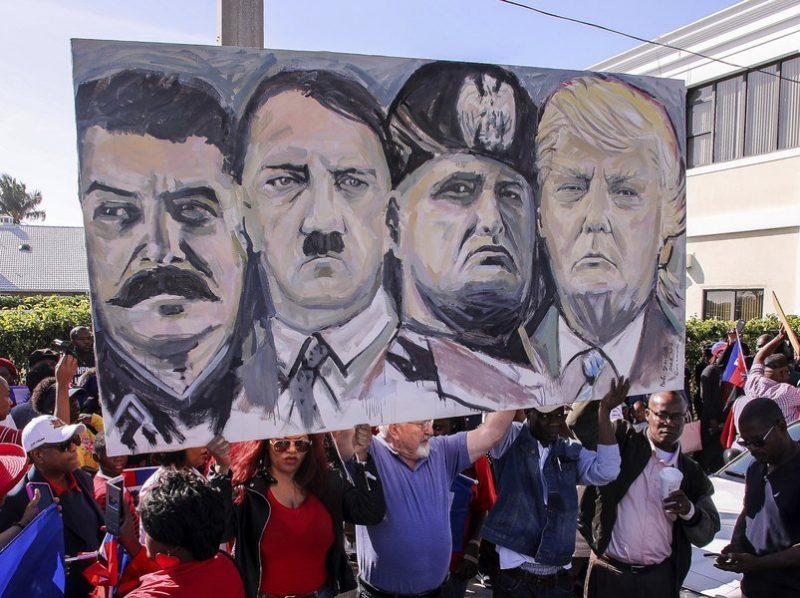 Trump Germany Circa 1933 Is Upon America

The Mueller Report exonerated President Donald Trump from its investigation on whether Donald Trump colluded with Russia during the 2016 elections. That does not mean the American voters are about to forgive his faux-pas, which mainly remind us of another time in another place. This is Trump Germany circa 1933.

This article is partially about Trump racism, which has been irrefutably demonstrated through his words, and deeds or lack of.  If the man looks and sounds like a rotten tomato, that’s on him, not the American people. Those who voted for him have to live with this fact even though the majority seem to feel comfortable embracing his racism and demagoguery.

This article is also about our own loyalty to a man as opposed to our institutions. As imperfect as they are, our institutions in our republic represent the collective will of the nation. Trump voters seem oblivious to this fact.

When their man stands by an enemy of ours, yet takes a position mirroring the enemy against our own institutions, it is unconscionable for any supporter to justify this blind loyalty. History reminds us plenty of other times when loyalty to one man repudiated the cumulative loyalty to their nation; in our case, to our constitutional republic. They all believed this one man would bring them greatness. Just as Germans believed Hitler would bring greatness to Germany.

The differences between Germany and the U.S. are obvious, but the circumstances are not.

Donald Trump has his own vision of Lebensraum, which begins by building a wall. Cleansing America from the brown people would shortly follow the way the Final Solution followed a charismatic leader in Germany. We are not saying the methodology will be the same, but who thought that the Trump Administration is capable of separating children from their parents to impose a tactical policy move? Bad stuff always start small, until it’s too late to see what went wrong. This country is in the middle of a Trump Germany circa 1933 pushing towards a Krystallnacht, then the Final Solution against all non-whites.

You can feel it the moment Trump attacked our institutions in support of the same attacks Putin just landed on our chin after their Helsinki meeting. Yet, Trump loyalists seem to ignore him just as the Germans ignored Hitlers’ mauling Germany’s institutions to establish his own (i.e. the SS, the Gestapo, the Youth Movement, and many others). Trump today is mauling our institutions and his supporters seem to go along with this dangerous precedent. No matter what Donald Trump does, his supporters seem to ignore his trespasses. Just as the German people ignored Hitler when he began to round the Jews.

THE BROWN PEOPLE, NOT THE JEWS

Except this time, it is not happening to the Jews. It is happening to people from south of our borders, the Muslims trying to escape oppressive persecution by the likes of Baschar al-Assad of Syria, and to the black people being hunted by really bad policemen who joined the force just for this reason. Trump celebrated the latter when he named his speech accepting convention “The Law and Order” GOP convention.  In 2016, policemen killed 580 black people. That is not enough for Donald Trump. He wanted a convention to encourage more killings.

Meanwhile, his supporters gloat when trump attacks our mainstream media by calling their news fake. Or by calling our brave reporters and journalists “Enemy of the People”. Just as Hitler, Stalin, and Mao denounced their enemies using the same label. Between Hitler, Mao, and Stalin, they killed 135 million people. Why would our President want to associate himself with genocidal maniacs? Does that not bother any of his supporter?

Trump is leading America down the wrong path. His praise of bad actors around the world (Putin, Mohammad bin Salman, Kim Jong-un, Xi-jinping, Duterte, and el-Sisi ) should concern us all. Trump is blazing a Trump Germany circa 1933 because his supporters are empowering him to turn this country on its head the way the Nazis turned Germany.

After all, Trump roots hailed from Germany.