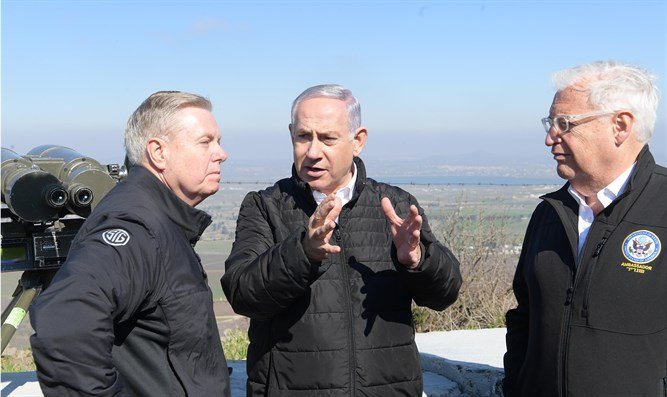 On Monday, U.S. Sen. Lindsey Graham vowed to push for U.S. recognition of Israeli sovereignty over the Golan Heights. Thus creating a new gift for Israel from the Trump administration in return for some political tangible favor negotiated behind closed doors. Assad losing Syrian territories piece by piece. His father gave away the Hatay Province to Turkey in 1998.

The South Carolina Republican said he aimed to change the current U.S.-designation of the Golan as disputed territory. Israel captured the Heights in the 1967 war. He spoke during a tour of the frontier with Israeli Prime Minister Benjamin Netanyahu.

In past negotiations, Syria has demanded a withdrawal from the Golan as part of any peace deal. With Syria ravaged by a nearly eight-year-old civil war, peace talks with Israel seem unlikely anytime soon. When Assad destroyed Syria, he destroyed any capacity or political leverage to negotiate Syria’s territorial integrity.

Graham called the prospect of Israeli withdrawal from the Golan “a strategic nightmare” and political “suicide”. He cited shared Israeli and American concern over Iranian entrenchment in neighboring Syria. Israel has admitted to carrying out scores of airstrikes in Syria against Iranian targets in recent years.

A beaming Netanyahu applauded Graham’s remarks and asserted that Israel would never give up the land.

“I think it’s very important that the international community recognize this fact, and accept it, and most especially our great friend, the United States of America,” Netanyahu said, thanking Graham for his “unbelievable support.”

Israel annexed the Golan Heights in 1981 because it could not find a peace partner in Assad. The way it found it in Anwar Sadat of Egypt.

Republican senators introduced a bill last month that would recognize Israeli sovereignty over the disputed territory. Graham, one of the co-sponsors, said he expected the legislation to galvanize bipartisan support.

Such a move would fall in line with the Trump administration’s pattern of lavishing Israel with symbolic gifts and political support.

The Trump administration has moved the U.S. Embassy to Jerusalem, slashed hundreds of millions of dollars in aid to the Palestinian Authority, and shut down the Palestinian diplomatic mission in Washington.

Last week the U.S. also shuttered its consulate, which served as a de facto embassy to the Palestinians, and handed diplomatic reigns to ambassador David Friedman, a staunch supporter of the Israeli West Bank settlement movement.

These steps have sidelined the Palestinians.

The Israeli government has welcomed this string of supportive moves in anticipation of “Deal of the Century,” the administration’s peace plan to resolve the Israeli-Palestinian conflict, which the Palestinians have preemptively rejected.

Trump’s son-in-law, Jared Kushner, has said he will unveil the plan after Israeli elections on April 9.