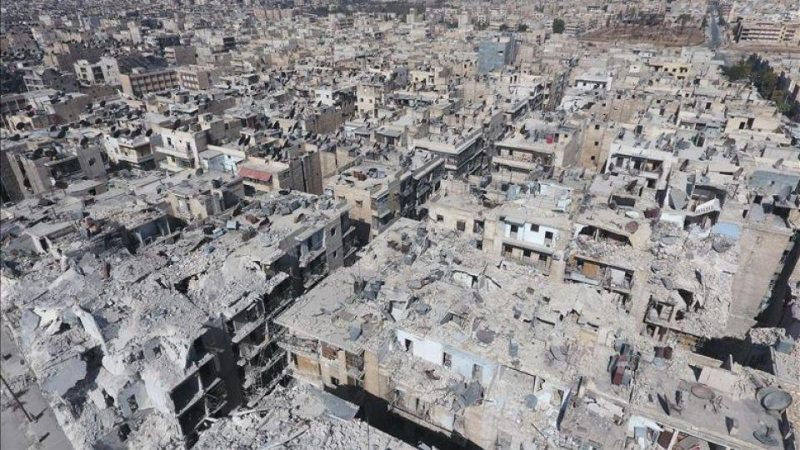 Where does power reside in Syria? Many would say Russia controls the landscape in the Levant through its Syrian occupation. Many others would say Iran is the real player in Syria the way it has been in Lebanon. However, there is a certainty that hovers over all arguments invisible but quite potent: A powerless Assad reigns over ruins. Assad is but a figurehead void of any power.

The videos on YouTube, some of which have been taken down by Google, for one excuse or another (The worst excuse used is that the violence violates YouTube terms of use), tell the real story of Syria. Where it was and what has become of it. When one is presented with the real statistics of death, destruction, displacement, and disappearances (4D’s), it is hard not to project that over the ruins of Syria sits a man calling himself president but whose real title is “Rubble Concierge”. Powerless Assad reigns over ruins but still calls himself a president.

REAL POWER OF A NATION IS ITS OUTPUT

Just imagine yourself, for a moment, presiding over a country that sits in ruins. The real power of a president and his nation emanates from her real output. Whether it’s economic output, military output, goodwill output, or political output revolving around consensus and respect. Assad, for all intended purposes, has none of the outputs. The most under-detected one is the consensus output, which clearly demonstrates the pariah status of his rule over a ruined country.

The only other rulers who have accepted Assad, as a president, are those with little international acceptance of their own. How can Assad convey the power of his presidency when Maduro of Venezuela, Bashir of Sudan, or that little comedic figure in North Korea are the only ones to have joined his club? None of whom sits on a heap of physical rubble the way Assad does. Not only is Assad powerless, but he is a tragic comedy in motion everyone is waiting for the first to laugh to follow with their own mocking laughter. The man still thinks he is a president. President of his own rubble.

The Assad cataclysmic rule over Syria is over because Syria, as a country, has chattered into pieces. As long as Syria’s output is non-existent, Syria will remain a lost geography ruled by an imbecile the prize of Voltaire’s pen of sarcasm. Imagine her a carcass feasted upon by the Assad virus but still believing the hyenas to be the cause of her slow death.

Syria is dying slowly because of Assad and his savagery. It is dying because his virus is killing her. No output, no nation to speak about. No output, its lands and its borders are good for the taking.

Any wonder why Senator Lindsey Graham wants Israel to swallow a chunk of the Assad virus-infected Syria?

Meanwhile, the ill-considerate president of Syria’s ruins wants to erect statues symbolizing the Assad virus that destroyed the country.

This is like San Francisco erecting a statute of the Aids virus in Union Square.

Anyone who thinks Assad won the war and is standing strong is an idiot.