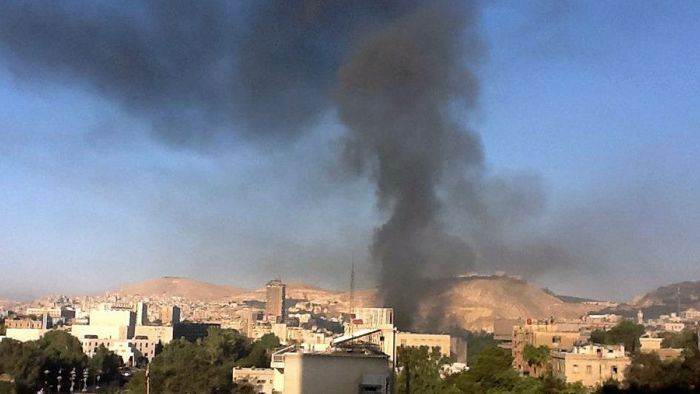 This morning, two extremely large explosions took out the military command center in Hay’s al-Arkan in Damascus. Is this part of the Assad Big Bang Theory?

We all know that the Big Bang theory predicts the world started with a Big Bang some 14 Trillion years ago. Not to be one to diminish the value of this grand theory, we ask ourselves: What about the Damascus Big Bang theory?

Those loud explosions taking place once in a while in the heart of Assad’s command structure and who often succeed in separating him from his favorite people. What is the theory behind those? For they look to us to be as mysterious as the original Big Bang being recreated in a tunnel somewhere in Switzerland today.

During the Cold War, the United States and the Soviet Union always understood that special non-diplomatic US and Soviet spies were fair game. Theirs was a poker game with the highest of stakes. If one country catches a spy, either can kill, imprison, and torture for information. Both superpowers accepted those rules and everyone played by them.

But in Middle Eastern terms, the Cold War being waged today between Iran and the Arab countries has different rules. It starts with a physical war and ends either inconclusively or with one bloody winner takes all. There is no such thing as accepting defeat, a hand-shake, and let’s start all over again. Sunnis and Shia have been fighting for ONE winner since 632 CE and they will continue to fight for that unreachable goal for the next 1,500 years.

In this war between Shia and Sunnis, Big Bangs happen to be equivalent to a spy confessing during the Cold War. They leave death and signatures behind them equivalent to losing a valuable asset as a result of confessions. The massacre of Darraya was a blow to the Syrian freedom fighters, but the mysterious Big Bangs in Damascus are by far the biggest losses the regime experienced as it fights for its survival. With too much propaganda and too little capability.

How could anyone penetrate the impenetrable to plant such deadly bombs? Today’s explosion happened around 7 this morning Damascus time and although the regime claimed no deaths, witnesses could see and hear ambulances racing to that command center. The regime closed all roads leading to a single building. Is it possible that after the last big explosion that took the life of the angelic Assef Shawkat, the big commanders decided to meet at different unusual times and that a meeting was taking place early this morning? Ambulances racing to a building whose offices open around 9 am sounds to us like there is a bloody bull’s eye behind all that smoke.

THE UNDERBELLY OF THE BEAST

What about the Assad Big Bang Theory? Who are the people behind these difficult tactical operations?

Are they insiders trying to overthrow Assad and his brother without making their intentions public? Or was it the work of some precise operation only western countries are capable to mount?

The public is not privy to the underbelly of the beast and any questions asked here are theoretical in nature. Oh! It’s such a pleasure to sleuth this carcass.

Could this explosion be to avenge the killing of Ambassador J. Christopher Stevens because Iran and Syria were behind the al-Qaeda’s attack on the US Embassy in Libya? Or was it in response to Assad’s nonsensical claims to winning the war?  To keep his mouth shut in the future?

Did the explosion happen to keep the morale of the Syrian freedom fighters high enough to continue their battles? Or was the explosion to send Putin a message to pressure him for a sensible solution in Syria?

So many theories behind the Assad Big Bang with so little information to be as conclusive.

Our over-optimistic guess? Maher al-Assad may have died in today’s explosion.

Sarkozy: 8,000 Killed in Homs in 3 Weeks
Saudi Arabia strikes back
Chlorine attacks continue in Syria with no prospect of Assad being brought to account
Opinions 1006 Syrian Revolution 1352