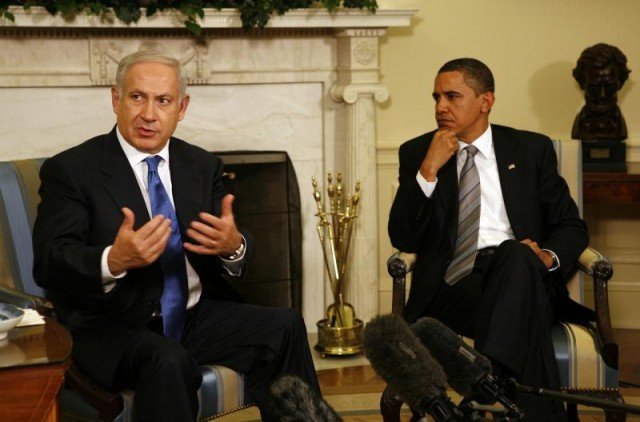 Netanyahu is not Obama

June 23, 2014 1:23 am 0
Assad Masterminded The Paris Attacks Like He Masterminded Foley’s Beheading
What Have the Sunnis of Syria Done to Deserve Ethnic Cleansing?
Assad Alawite Militia Executed 6 Reconciliation Mediators

In response to an explosion in the Golan Heights that killed an Israeli-Arab youth happy to be with his father on the first day of his summer holiday, the IDF bombed nine different Syrian Army positions inside Syria to include a military HQ.

Nothing indicated the Syrian Army was behind this attack, or was it?

More than likely those who carried the attack are extremist Muslims happy to be targeting Israel. However, if Israel bombed Syrian Army positions, this could only mean the real culprit behind this attack is the Syrian regime. Think I am wrong, read this Newsweek article.

Unlike Mr. Obama who is an easy prey for the devious manipulations of Iran and Assad, Israel knows the Assad regime all too well. By bombing Syrian Army positions, Israel is sending Assad a strong message not to use proxy terrorists, an Assad signature Israel will not tolerate. The Israeli message to Assad is clear: Netanyahu is not Obama.

Watch how the Golan Heights will remain calm for weeks to come, or even months, before Assad itches again to stir the hornets? nest. He will try to mask the attacks much better next time, but Israel will be ready again and will not hesitate to bomb more Syrian Army sites.

President Obama ought to learn a lesson from Israel instead of believing that collaborating with America?s enemies will somehow deliver us from evil. I suspect, by the time Obama leaves office in 2016, there will be two more civil wars raging in the region. Call it the price of stubborn ignorance.

Here is this small country living in the midst of so many haters and ill-wishers who want to wipe it out of existence. Yet, every terrorist fears Israel far more than he fears America because Israel reacts appropriately to terror and its masters using an old adage: Step on our fingers and we will step on your neck.

Today every terrorist reading Obama, be it Assad, Khamenei, or ISIS/ISIL, believes that stepping on America?s fingers will earn him a White House bonbon. Who will stop the terrorists? The 300 advisors Obama just dispatched to Iraq or his strong will to help remove Assad, which would have harmed the Iranian Mullahs irreparably?

Iran and al-Maliki must be shaking in their boots after Secretary Kerry hinted Iraq needs a new leadership. This White house believes the decision over who leads Iraq is Obama?s. The Mullahs have never laughed so hard.

History is going to be a very harsh judge of this President and no amount of spin or silence by the US mainstream media will save him from the truth of his incapable hands.

Mr. Obama would have learned something from Israel if only he was better calibrated ideologically to defend America rather than to change America.

For those parents hoping their children attend Harvard, tell them to stay away from ideological tenures they all boast Obama is their masterpiece.

Remove Assad From Power for Syrian Refugees to Return Home
Israeli Incompetence at Waging the War of Information
The Syrian Opposition Will Not Unite Until..
Slippery Barack Obama 976 Support U.S. Allies 152