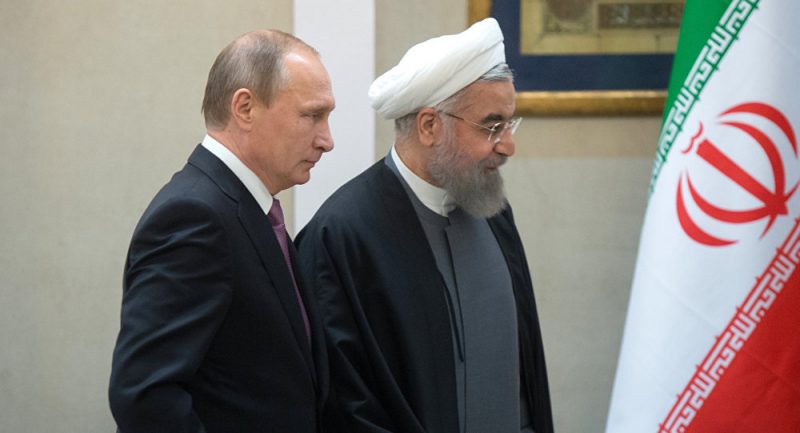 Russian President Vladimir Putin began a visit to Iran on Wednesday designed to underpin closer ties between two countries at loggerheads with the United States as President Donald Trump threatens to pull out of a 2015 nuclear deal with Tehran. Will Putin tame Iran or empower the mullahs?

Putin and his Iranian hosts are expected to discuss the nuclear deal and regional crises such as the Syrian conflict, in which Moscow and Tehran are the main backers of the Assad regime, while Washington, Turkey and most Arab states support opposition groups seeking to overthrow the regime.

Russian and Iranian help has proved crucial for Assad, allowing him to win a series of military victories since 2015 and to reestablish his control over most of Syria. Moscow is now trying to build on that success with a new diplomatic push, including a meeting in the Black Sea resort of Sochi next month.

Moscow is also an important ally for Iran in its confrontation with the Trump administration, which on Oct. 13 refused to certify Tehran’s two-year-old nuclear deal with six major powers that include Russia and the United States.

Russia has criticized Trump’s move, which has opened a 60-day window for Congress to act to reimpose economic sanctions on Iran. These were lifted under the 2015 accord in return for Tehran curbing its nuclear program.

“This is a very important visit (by Putin) … It shows the determination of Tehran and Moscow to deepen their strategic alliance…. which will shape the future of the Middle East,” one Iranian official told Reuters, on condition of anonymity.

“Both Russia and Iran are under American pressure … Tehran has no other choice but to rely on Moscow to ease the U.S. pressure,” said the official.

The fear in Washington, monitoring closely this visit, revolves around Putin empowering Iran with nuclear capabilities to punish the United States for the sanctions it levied recently against Russia.