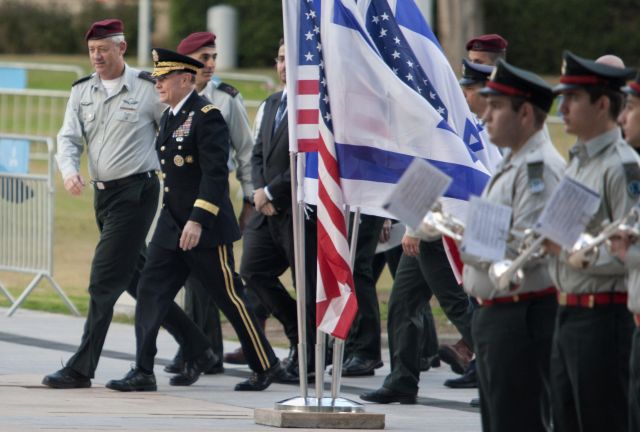 Why So Many Reassurances If Israel Feels Secure?

June 10, 2015 9:27 am 0
Stalin: Death is the Solution to all Problems
An Egyptian Scenario No One is Contemplating
Is the Arab League Trading Syria for its Security?

America’s position in global affairs as a superpower protecting the free world dictates that often it provides diplomatic and military assurances and reassurances to its allies and friends in a world fraught with evil intentions.

It is a role the U.S. State Department and the Pentagon take quite seriously.

However, since the administration of Barack Obama began in 2008, we have never witnessed so many assurances and reassurances provided to the State of Israel as well as Saudi Arabia so often. It seems that our allies do not feel quite secure as long as Obama is the U.S. president.

General Martin Dempsey, the Joint Chief of Staff, just provided reassurances to Israel of America’s “unshakable” support for its security. We should not be providing reassurances that often, and if we do, it is because our allies feel the insecurity of our promises.

Reuters reported that U.S. General Martin Dempsey, on a visit to Israel, said he shared a core Israeli fear that sanctions relief for Iran following a nuclear agreement would allow Tehran to give more money to its military and its guerrilla proxies. No kidding!

If he and Barack Obama share this concern, they should not be releasing $150 billion to Iran. Read this article about the terror mess this would cause.

If Obama has to continuously provide assurances and reassurances to our allies, it is a sure sign something is defunct in his policy approach.

The United States of America weakens itself vis-à-vis its present and future friends when it is constantly seeking to assure nations and allies it needs never to question its assurances to them.

It goes to show how insecure our allies are with Obama still in the White House when America needs to assure and re-assure them of its “unshakable” commitment.

Is Obama dispatching officials, other than himself, to provide these reassurances because the Israeli people question his true motives? Netanyahu winning the Israeli elections in a landslide answers this question amply.

Why So Many Reassurances If Israel Feels Secure?