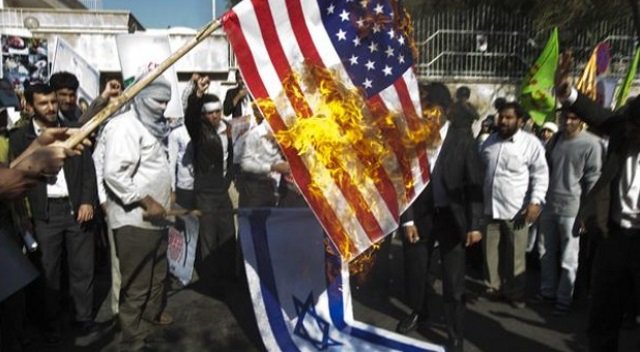 Distinguishing between friend and foe

TFS Note: Israelis do NOT burn the American flag and chant “Death to America”. Obama thinks he can change America’s history, but he will fail miserably. Post the coward Barack Obama, America will embrace Israel like never before because we will all come to realize and appreciate what true friendship, based on the same values, in the Middle East means.

Source: The Washington Times – by Gary Bauer (Distinguishing between friend and foe)

Since Israel repelled its Soviet-sponsored Arab aggressors in the 1967 and 1973 wars, a strong U.S.-Israeli alliance has been a cornerstone of America’s national security strategy in the Middle East. The Obama administration’s undermining of that relationship to facilitate a rapprochement with Iran has emboldened enemies of the West and the values for which it stands.

Trying to turn over a new leaf with an old enemy has only resulted in a more hostile Islamic republic. The Obama administration’s retreat from the Middle East has encouraged Iranian aggression, threatened regional stability and undermined American national security interests. In addition, President Obama’s tilt toward Tehran has frayed longstanding allied relationships, upset the traditional balance of power and infected the democratic community with defeatism. Only those who oppose Western values and human rights are celebrating.

Moreover, the perception of capitulation by a previously influential superpower has caused a ripple effect through the region, eviscerating any sense that the world order is backed by the United States. Although the Obama administration claims that it remains fundamentally important for the United States to prevent Iran from advancing its hegemonic ambitions, it has done almost nothing to demonstrate seriousness about stopping a new alignment of dangerous actors — with Iran as the fulcrum — from dominating the region. Russia’s buildup of forces in Syria to bolster the Assad regime is merely the latest stinging American defeat. A Middle East more concerned about consequences from Russia, rather than the United States, will continue to sink the region into chaos.

The framework for the Obama administration’s outreach to Iran was morally and strategically flawed. Iran provided no grounds to believe that it would radically transform. On the contrary, the regime’s militant Islamic creed demonstrated increasing disdain for Western civility during the nuclear talks, not less. The longer the United States flirted with the clerical regime’s architects, the more it endorsed a bigoted ideology and strengthened a regime devoted to diluting its influence. When Israel and other opponents of the deal with Iran tried to be proactive, rather than passive in the face of Iranian aggression, the Obama administration distorted their legitimate strategic argument and constrained their operability.

Increasingly, Israel has become the object of withering criticism from the Obama administration and unfriendly groups, which find Israel’s triumph over autocracies and guerrilla forces offensive to their sensibilities. Such is the commitment of the administration to the cause of progressivism that it supports the status quo in Iran, but finds the status quo in Israel unacceptable.

There is something shameful about the Obama administration’s failure to distinguish between democracies that share American interests and dictatorships that wage war against the West. The notion that one could be censorious confronting Israel’s liberal and democratic standards but tolerate Iran’s theocratic prejudices is offensive to true Western sensibilities. The president’s double standard is morally inconsistent with the defense of democracy and strategically insensible regarding the national interest.

No relationship is in more urgent need of repair than that with Israel, which remains a credible foil to Iran’s growing danger. The United States can and should work harder to support Israelagainst radical Islam. A vision of moral clarity should guide American policy toward terrorism. In the absence of such a framework, one should expect enhanced determination on the part ofIran and its clients to exploit the intentions of the Obama administration, and promote greater violence and instability.

As a liberal democracy, Israel’s greatest strength is that it continuously examines its weaknesses — ensuring more freedom, opportunity and success than its neighbors. Pursuing Western norms has aided Israel to punch above its weight in many categories, especially economically and militarily, making it a force multiplier for America in the Middle East. That should inspire any policymaker not only to maintain, but to strengthen the alliance.

Mr. Obama is expected to meet with Prime Minister Benjamin Netanyahu in November. The president should drop all pretense of (misplaced) moral superiority and make clear how he plans to mend ties. To allay Israel’s concerns of a nuclear-armed Iran — and to restore regional deterrence against a rising hegemon — the United States could provide Israel with military hardware capable of attacking Iranian nuclear facilities with a degree of confidence. At worst, America will have regained a friend, and Iran will know the limit of its transgressions. At best, it will send a message to those who would foment instability that the United States stands firmly on the side of those who promote, and practice, the values for which we stand.

Iranian leaders imagine a world without America. Their blueprints for destruction run through the one and only Jewish state. Critics of Israel shouldn’t deceive themselves: The abandonment of Israel threatens all of Western civilization.

Gary Bauer, who served in President Ronald Reagan’s administration as undersecretary of education and chief domestic policy adviser, is the Washington director of the Christians United for Israel Action Fund.

Distinguishing between friend and foe