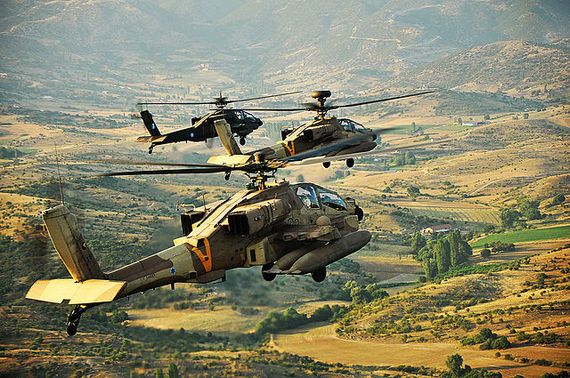 It is delusional to think that the international community would be willing to strip Hezbollah of thousands of missiles aimed at the Lebanese and the Israeli people the way it tried and failed to strip Assad of his sarin and VX gas. While Hezbollah is busy defending Assad, is it time for Israel to attack Hezbollah to strip the terror organization of its missile capabilities?

Alternatively, Israel can wait until Hezbollah is far deeper into the Syrian civilian war and entrenched on the Mediterranean coast and in Damascus fighting to defend the Alawites from slaughter. If Israel aims to bring the Assad regime to its knees, it would attack soon before Hezbollah mounts any offensive deep into Syria.

Lebanon’s northern city of Tripoli, a majority Sunni and the second largest city in Lebanon, is a buffer between the Alawite coast and the Lebanese Shia terror group. There is a point when the Assad regime, or the Alawites without Assad, and Hezbollah would attempt to conquer Tripoli to create a contiguous land mass that no Sunni enclave can threaten (i.e. Tripoli), and which Iran can use to deliver weapons to Hezbollah using the Latakya airport as its main hub for delivering weapons.

Is it time for Israel to attack Hezbollah or simply wait until it is weakened further?

If Israel strikes Hezbollah BEFORE the next big battle in Tripoli, it may have a chance of cutting off Hezbollah from its supply line in Tehran. Otherwise, even if Syria is liberated from Assad, the Tripoli weak link, if Hezbollah conquers it, may save it from a certain demise. An imminent Israeli attack would force Hezbollah to forego Tripoli for now.

If Israel attacks Hezbollah, Israel would hear nothing but accolades from the Arab street. Few years back it would have brought the wrath of all Arabs down on her. Because Hezbollah is fighting on Assad’s side and because Assad continues killing the innocent Sunni civilians with his barrel bombs, most Sunni Arabs would applaud Israeli actions against Hezbollah.

No UN would vote to strip Hezbollah of its deadly capabilities. Only Israel alone can secure its borders and its people by choosing to strike Hezbollah when Nasrallah is weak and flaccid. An incursion into Lebanon against the extremist terror organization would accelerate Hezbollah’s break-up and would send a notice to Iran and other terrorist organizations and the world that Israel will always protect its people.

Is it time for Israel to attack Hezbollah? Hezbollah cannot possibly defend on two fronts in Syria and Lebanon simultaneously.

Is it time for Israel to attack Hezbollah? It is certainly time to contemplate it and carry out the attacks if it helps eradicate Hezbollah’s terror on a permanent basis.

Let us see how much Obama supports Israel when an Israeli strike against Hezbollah spoils his US-Iran deal.