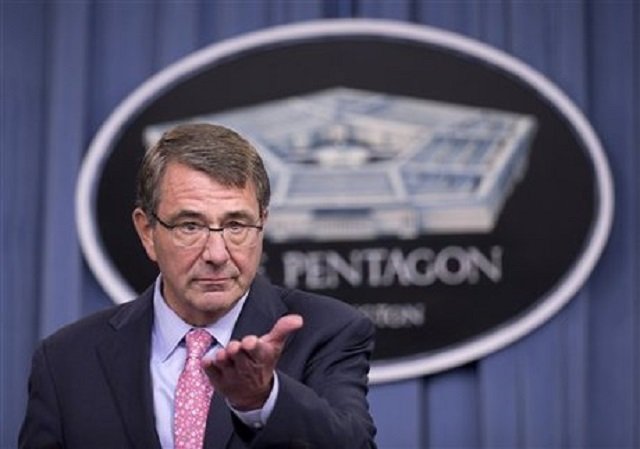 October 5, 2015 7:35 am 0
Russian opposition plans protest over Putin’s war in Syria
After Paris Attacks, Europe is at Putin’s Mercy
Putin and Assad Using Migrant Crisis as a Weapon

U.S. Defense Secretary Ashton Carter said Monday that Russia is pursuing a “losing strategy” in Syria and that it must live up to its commitments in Ukraine. While Putin annihilates Syrian moderate opposition, the U.S. response is to offer some advice.

Speaking in Madrid at the start of a five-day trip to Europe, Carter told Spanish military officials that by carrying out bombing in Syria, Russia had only worsened the four-year conflict.

Russia last week started air strikes in Syria, claiming it was hitting Islamic State jihadists. But the Pentagon says Russian jets have targeted other rebel groups in order to support the regime of President Bashar Assad.

“Russia has escalated the civil war, putting further at risk the very political resolution and preservation of Syria’s structure of future governance it says that it wants,” Carter said.

“It remains my hope that Vladimir Putin will see that tethering Russia to a sinking ship is a losing strategy, and will decide to confront the threat presented by (IS) instead of continuing its unilateral airstrikes against Assad’s opposition.”

The U.S. is offering advice while Putin annihilates Syrian moderate opposition. Obama, once again, is letting the moderates down.

Carter’s trip is aimed at acknowledging allies in the 60-plus member U.S.-led coalition that is carrying out daily drone and plane strikes against IS jihadists in Iraq and Syria.

Turkey on Monday said its F-16 jets had at the weekend intercepted a Russian fighter plane which violated Turkish air space near the Syrian border, forcing the aircraft to turn back.

It demanded that “any such violation not be repeated”, otherwise Russia “will be responsible for any undesired incident that may occur.”

Europe is struggling to deal with the refugee crisis sparked by the Syrian conflict, which has uprooted millions of people.

The tour comes at a fraught time for Carter, who started in the Pentagon’s top job in February and who faces pressure at home over Syria and a simmering scandal involving military officials allegedly cherry-picking intelligence.

Carter on Thursday is attending a NATO ministerial summit that is expected to tackle a number of issues including Russian aggression in eastern Ukraine.

“We will continue to make it clear that if Russia wants to end its international isolation and be considered a responsible global power, it must stop its aggression in eastern Ukraine, end its occupation and attempted annexation of Crimea, and live up to its commitments under the Minsk agreements,” Carter said.

“We will take all necessary steps to deter Russia’s malign and destabilizing influence, coercion, and aggression, including its efforts to undermine strategic stability and challenge the military balance in Europe.”