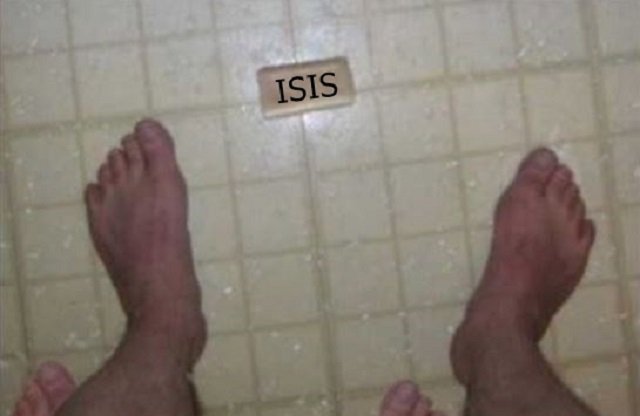 October 6, 2015 10:02 am 0
Mr. Obama, we are not free riders
The Nine Dangers Facing Syria
The costs of Obama’s Syria policy are apparent to everyone but him

Barack Obama’s Pentagon, as the commander-in-chief, has become Putin’s prison bitch. Our honorable and brave fighting men and women are rendered inconsequential, almost begging an international thug for answers because of Barack Obama.

The United States and Russian militaries held a secure video conference last week in which Pentagon officials suggested protocols aimed at preventing a mishap, as the former Cold War foes carry out rival campaigns of air strikes in Syria.

But since then, Moscow has failed to follow-up, Carter said.

Carter told reporters as he visited Moron Air Base in Spain:

“We are waiting for the Russians. They owe us a response. They should come in and do it right now.”

The discussions on ways to keep the U.S. and Russian aircraft from clashing have gained urgency after the United States and NATO denounced Russia on Monday for violating Turkish airspace. Turkey, a NATO ally, threatened to respond, raising the prospect of direct confrontation.

The U.S. proposal includes basic safety protocols, such as maintaining a safe distance between U.S. and Russian aircraft and using common radio frequencies for distress calls, officials say, adding they would be similar to civil aviation.

Carter expressed frustration that Russia, after calling for talks with the United States, had let so much time elapse before getting back in touch on the U.S. proposals for air conduct.

“It’s only professional that you follow through on the requests they made and they’ve not done that yet. And that may be a further sign of their strategic confusion, I don’t know,”

The Pentagon chief does not realize because of how weak the White House response has been to Putin’s invasion of Syria, Putin is not going to skip the chance of humiliating America even further. Obama’s Pentagon is now Putin’s prison bitch.

The United States and Russia say they have the same enemies – the Islamic State group of Sunni Muslim militants who have proclaimed a caliphate across eastern Syria and northern Iraq.

Carter said Moscow’s strategy of bolstering Assad would backfire. Putin must be rolling his eyes given the U.S. response to his invasion of Syria.

“In Syria, they are going to be checked in the first instance by the backlash that they’re going to get on account of siding with Assad against everyone else,” Carter said.

America No Longer Matters, Thanks to Barack Obama
When the Obama Magic Died
The costs of Obama’s Syria policy are apparent to everyone but him
Slippery Barack Obama 976