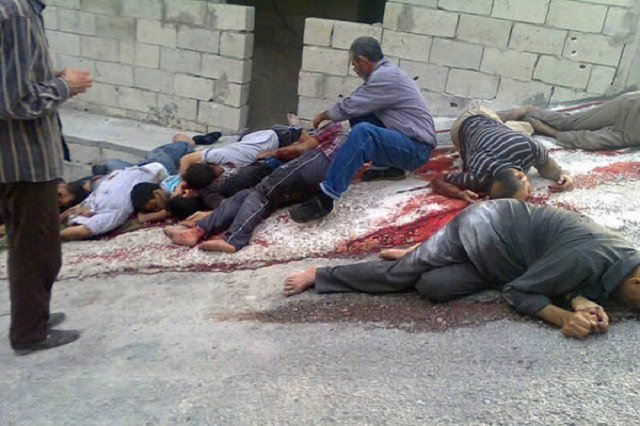 When Speaking of Yemen, Iran Ignores Its Atrocities in Syria

Cut off from Yemen and its allies there by a Saudi-led military campaign, Iran has intensified a media counter-offensive against Riyadh, accusing its regional rival of inflicting catastrophic suffering while presenting itself as a blameless peacemaker.

Of course, when speaking of Yemen, Iran forgets its own atrocities in Syria.

Iranian state media have given blanket coverage in Arabic, Farsi and English to the three-month-old war in Yemen, where Saudi Arabia and Sunni Arab allies have been bombing the Iranian-allied Houthi faction for over three months.

While the violence in Yemen has killed more than 2,800 people, the Iranian interference in Syria’s civil war has led to the death of more than 300,000 people. Only Saudi Arabia reminds us how much Iran ignores its atrocities in Syria.

King Salman must be doing something right against Iran because the hardline Fars news agency on Wednesday released a video clip showing the face of Saudi King Salman morphing into that of Saddam Hussein, the late Iraqi dictator loathed in Tehran as its enemy in a 1980-88 war, interspersed with scenes of crying Yemeni children.

Another example of Iranian anger at Saudi Arabia was a state-sponsored cartoon contest about the Yemen war — even as an Iranian court sentenced an activist to more than 12 years in jail on charges including drawing cartoons of Iranian lawmakers. Again Iran ignores its atrocities in Syria when it targeted pregnant women in Homs with their IRGC snipers. .

Another cartoon entry showed a Saudi fighter jet delivering bloodied Yemenis into the hands of jihadists, while the winner depicted the Islamic profession of faith being erased from the Saudi flag as bombs rained down.

In Yemen, Saudi Arabia and its partners aim to restore President Abd-Rabbu Mansour Hadi from his exile in the Saudi capital Riyadh, saying they are defending Yemeni sovereignty against the sudden rise to power of the Houthi militia over the past nine months.

The kingdom has held back from committing ground troops and has yet to find a powerful enough Yemeni ally to beat back the determined Houthis on land. al-Qaeda in Yemen is not an option for Saudi Arabia.

But the coalition does appear to have shut down the possibility of Iran sending material help to the Houthis: It has taken control of Yemen’s air space and waters and prevented Iranian attempts to ship and fly in aid.

The Saudi blockade shows that if Obama was determined to remove Assad from power, he would have also blocked arms shipments to the regime.

Now, making a virtue of necessity, Iran is hitting back on the airwaves as Iran ignores its atrocities in Syria.

“The Iranian strategy has changed partly because of a change of circumstances… (The embargo) prevents them from supporting the Saleh-Houthi alliance in an overt way,”

The Houthis are allied with army units loyal to former president Ali Abdullah Saleh, who stepped down as part of a Gulf-backed political transition following a 2011 uprising.

Iranian diplomats have cast Tehran as a peacemaker, putting forward peace plans and decrying “external meddling” from the United Nations to the Islamic Organization Conference.

Julien Barnes-Dacey, of the European Council on Foreign Relations, said:

“They are trying to turn on its head the narrative that Iran is always the one destabilizing the region,”

When Speaking of Yemen, Iran Ignores Its Atrocities in Syria