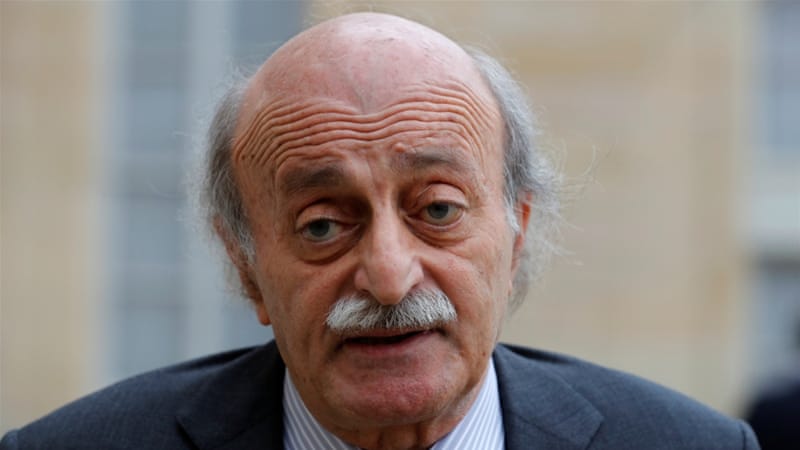 Walid Jumblatt is a Lebanese politician, and head of the Progresive Socialist Party, which controls the votes of the Druze population in Lebanon. Other than his big mouth, Jumblatt also happens to be one of the most corrupt politicians in Lebanon. In fact, Walid Jumblatt corruption is legendary in Arab circles.

Someone should pry open his finances, most of which has landed in big Swiss banks (Geneva branches) as far back as the late seventies. If Lebanon is suffering from economic meltdown, it is partially the result of his appalling nepotism. It is the duty of the new finance minister Ghazi Wazni to investigate this corrupt politician and expose him. Time for the good people in the Druze community of Lebanon to select a more honorable leader to represent them.

THE RIGHT SIDE, THE WRONG MAN

Grant you that Jumblatt stands on the right side of history in his battles with Assad whose father killed his father, but that does not give him a Carte Blanche to smear and belittle people at a time when his own corruption is so flagrant and so poisonous. In an article al-Arabiya published, Jumblatt called current Prime Minister Hassan Diab “is nothing.”

This is not to defend Diab whom we know nothing about except that Hezbollah agreed to his premiership. But by golly, every time Jumblatt hears something that threatens to expose his corruption, he starts spitting venom like a disoriented snake.

The corrupt elites in Lebanon have circled the wagon. They all protect each other. But all it takes is to peel one away to start naming names. Because of his rage, Jumblatt is the perfect candidate, if the Ministry of Finance is able to investigate him appropriating state funds, to open Pandora’s Box.

Between the pilfering of Hezbollah, Walid Jumblatt, and the newcomer Michel Aoun, Lebanon is melting away. Wazni should ignore his protector Nabih Berri and simply seek to repatriate the billions people like Jumblatt stole from Lebanon’s treasury. If not Wazni himself, then Lebanon needs a secret whistle blower with enough information for the U.S. and the EU to duly investigate where their aid packages have landed.

When you keep a jar of pickles for years, it is a question of time before it rots. This is Walid Jumblatt tenure since Assad killed his father in 1977. That’s 53 years of pilfering, stealing, and embezzling Lebanon. It’s in the billions, folks!

Lebanon needs a secret whistle blower with enough information for the U.S. and the EU to duly investigate where their aid packages have landed

Jumblatt is just a useful idiot. A far cry from the giant of a man his father, Kamal Jumblatt, was and whose hands were always clean. Not the son, unfortunately. Nothing moves without his cut, and no western aid package escapes his corruption.

There are some 20 Lebanese families that control Lebanon. All of them are corrupt in one form or another. All of them have embezzled millions and hundreds of millions. But Jumblatt, with a tenure of some 53 years, tops them all. The useful idiot has driven Lebanon to its collapse. Today, nothing short of an investigation into his finances should be acceptable to any Lebanese.

Let the world see how a small nothing of a politician can bring down a whole country.

Michel Aoun Asked for the World to Help Unconditionally
Protests in Lebanon Continue to Harass the Corrupt
Will Clown Aoun Pivot Away From Hezbollah?
Lebanese Uprising 75 Opinions 1006