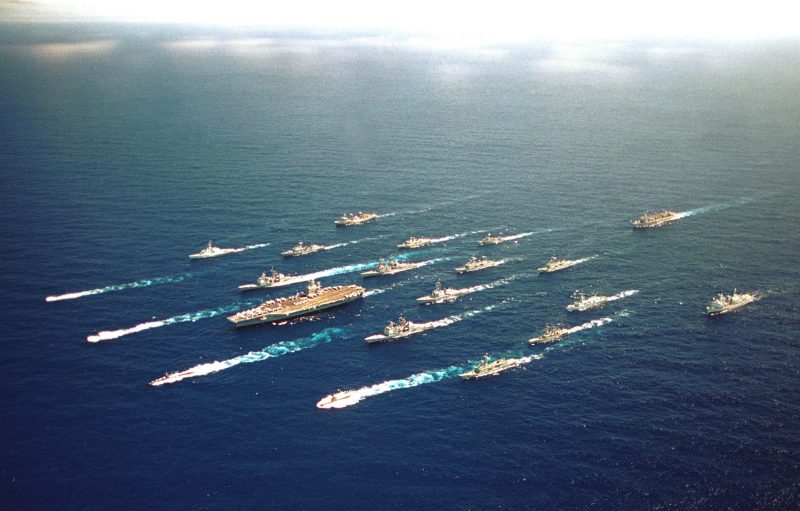 US Flexes Its Muscles in the Strait of Hormuz

The U.S. aircraft carrier strike group Abraham Lincoln sailed through the vital Strait of Hormuz on Tuesday. It happened amid simmering tensions between Iran and the United States. The US flexes its muscles in the Strait of Hormuz to show how serious it is about fracturing the Iranian regime.

Tensions in the Gulf have risen since attacks on oil tankers this summer, including off the coast of the United Arab Emirates. In addition to a disguised major Iranian assault on energy facilities in Saudi Arabia. Washington has blamed Iran for the attack.

The commander overseeing U.S. naval forces in the Middle East told Reuters in May that he would send an aircraft carrier through the Strait of Hormuz if needed.

In a statement on Tuesday, the Navy said the Lincoln transited through the Strait into the Gulf.

About a fifth of the world’s oil passes through the Strait of Hormuz.

The United States has deployed thousands of additional military forces in the Middle East, including bombers and air defense personnel, to act as a deterrent against what Washington says is provocative Iranian behavior.

The latest move comes as protests, sparked by gasoline price hikes, have spread across Iran since Friday. The demonstrators demanding that clerical leaders step down.

Meanwhile, Amnesty International said on Tuesday that more than 100 protestors had been killed in 21 cities in Iran. It happened during unrest that broke out over the rise in fuel prices last week.

Snipers have shot into crowds of protestors from rooftops and, in one case, from a helicopter, Amnesty said. During the on-going Syrian civil war, the Khamenei regime snipers have killed hundreds of pregnant women foraging for food. After the Assad regime levied a medieval tactic of laying siege to towns and starving people to death.

The anti-government protests began on Friday after the Khamenei regime announced a 50 percent hike in fuel price.

The London-based Amnesty International said that the Khamenei regime killed at least 106 protesters in 21 cities. Amnesty relied on credible reports from witnesses, verified videos and information from human rights activists.

Amnesty said in a statement:

The organization believes that the real death toll may be much higher, with some reports suggesting as many as 200 have been killed.

US Flexes Its Muscles in the Strait of Hormuz