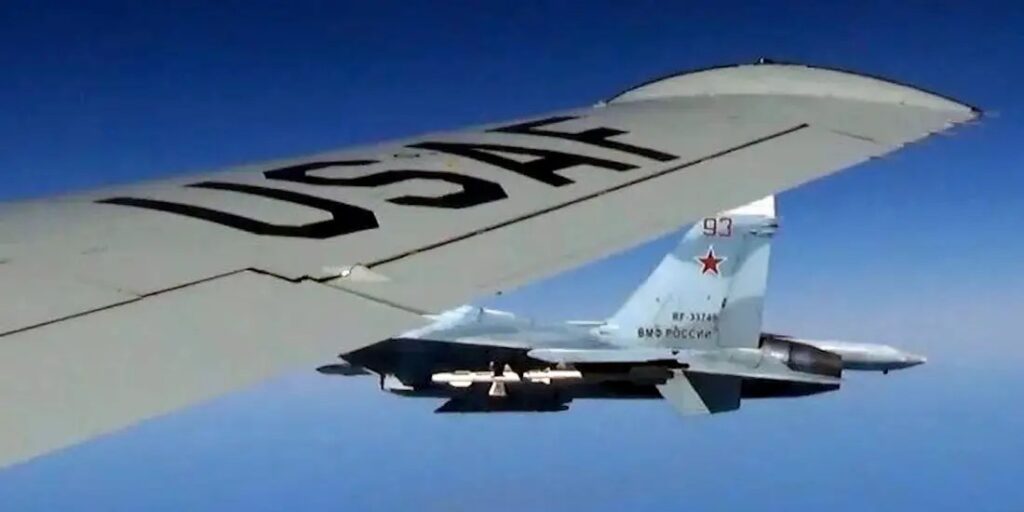 May 28, 2020 6:54 am 0
On Syria Biden Got Away With Murder
If Biden Wants a New Iran Deal the Israelis Should Negotiate It
Mohammad bin Salman Future is a Noose

In yet another incident of its kind, Russia recklessly intercepts a US spy plane flying in international waters over the Mediterranean off the coast of Syria. Although in international waters, nearby Russia operates its naval base in Tartus and the Homeihem air base. Of late, Russia has permitted Iranian planes to land in Homeihem, which may have prompted the U.S. action. The U.S. has every right to monitor the Iranian shipments to the Assad regime.

The U.S. Naval Forces website, part of the 6th fleet, described the incident:

On May 26, 2020, a U.S. Navy P-8A aircraft was flying in the Eastern Mediterranean over international waters and was intercepted by two Russian Su-35 aircraft over a period of 65 minutes. The intercept was determined to be unsafe and unprofessional due to the Russian pilots taking close station on each wing of the P-8A simultaneously, restricting the P-8A’s ability to safely maneuver.

The unnecessary actions of the Russian Su-35 pilots were inconsistent with good airmanship and international flight rules, and jeopardized the safety of flight of both aircraft.

The Navy then released a short video to show the encounter.

President Trump little darling in the Kremlin is Vladimir Putin. For the first year of Trump’s presidency, nobody has received so many accolades of admiration by a U.S. sitting President as Trump has delivered towards Putin.

To this day, and even as the U.S. pressures Iran and all the countries that help the Tehran regime, Trump has ignored Russian assistance to Iran. Including giving Iran the rights to land in its military air base in Syria. Those are the details that question Trump’s loyalty and Trump’s real agenda in standing by Putin through thick and thin. There are no excuses for this President that can justify his lack of action against our enemy. Not one.

In the past, Putin has threatened U.S. troops in Syria. In response, Trump remained silent.

Against this backdrop, the Russians feel free and safe to dangerously toy with our military. Why should they not when the man in the White House stands by them more than by our own. Our brave military should vote its conscious in 2020.

What Did Donald Trump Do for Syria?
America Deserves Better Than an Anarchist President
Assad and Putin Are Planning for a Biden Era
Elections 2020 56 Heroic US Armed Forces 19 Irresponsible Donald Trump 163 Putin Occupation 107 Syria News 1213