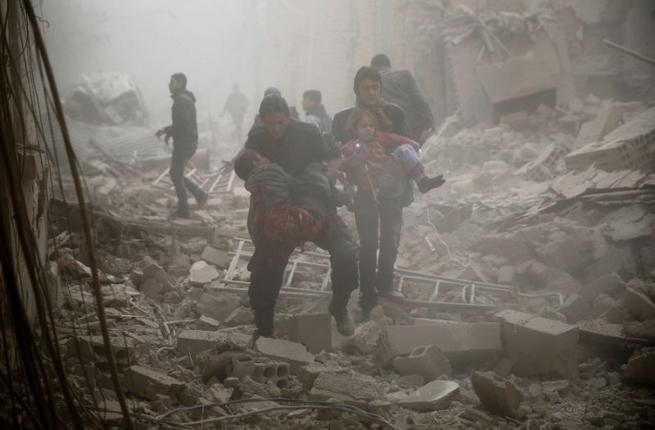 Reports of chlorine-gas attacks in Eastern Ghouta demand a harsh response from the U.S. military.

If the war in Syria is this century’s Spanish Civil War, then the carnage now occurring in Eastern Ghouta is a modern-day Guernica. Yet this may be a situation, unlike in 1937, where the world is in a position to do something about it.

According to human-rights groups, more than 12,000 civilians have died in the area of 400,000 just east of Damascus since fighting began in 2011. As the Syrian government has ramped up operations over the last two weeks, more than 500 people have been killed by air and artillery strikes. And, if reports from international aid workers are correct, Bashar al-Assad’s regime has added chlorine gas to its arsenal of barbaric weapons, alongside barrel bombs and cluster munitions. If so, this is a violation of both the laws of war and human decency.

Chlorine gas, while not as deadly as other chemical and nerve agents, attacks the respiratory system, causing permanent lung damage. Because chlorine has so many civilian uses, from cleaning bathrooms to purifying water, it is legal and thus very hard to monitor when it comes to war.

The moral responsibility for Eastern Ghouta clearly belongs to the Syrian government and its primary sponsors, Iran and Russia. But the West has hardly covered itself in glory with its efforts to stop the atrocities.

First, it failed to get any serious sanctions against Syria at the United Nations Security Council. And then, of course, was President Barack Obama’s infamous “red line” warning that the U.S. would respond militarily if Assad used chemical weapons on his people. The dictator called Obama’s bluff, one of the worst humiliations for U.S. foreign policy in the post-Cold War era.

In the end, all the West got was a limited agreement that Assad would allow Russia to destroy its stocks of nerve agents, with chlorine exempted. According to U.S. officials, Syria has clearly abrogated that agreement with Moscow’s connivance.

But the West hasn’t been spineless. Last April, after a sarin-gas assault, President Donald Trump authorized a large-scale cruise-missile attack on a Syrian air base. At the time, many scoffed that this was a token effort that did relatively little harm to Syria’s military. But there has been no verified use of sarin in Syria since the U.S. struck back.

It’s time for another red line, one that the U.S. won’t back away from. Trump should tell Assad and his Russian backers that any more proved use of any chemical weapon, including chlorine, will be met with even greater retaliation than what happened in April. It certainly won’t end the fighting, in Eastern Ghouta or across the country, but it may take away one of Assad’s most unconscionable methods of terrifying his citizens.