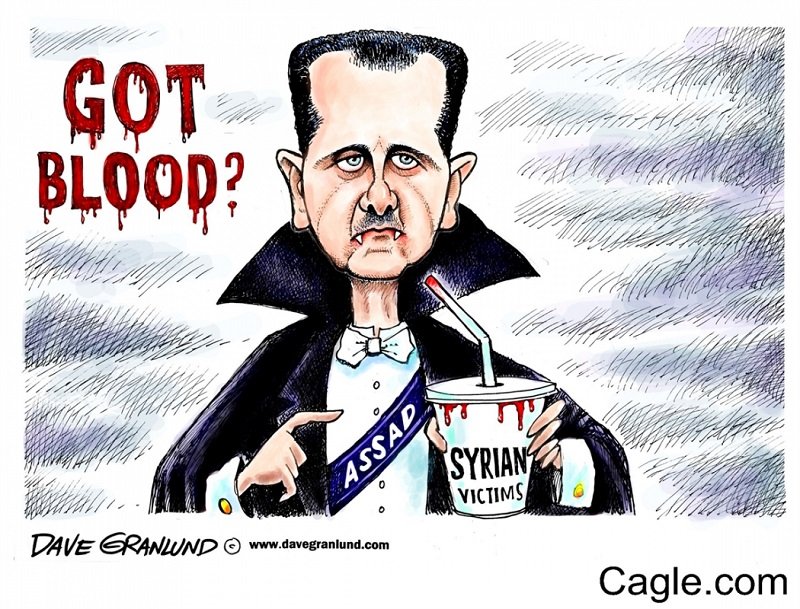 The True Lesser of Two Evils Between Assad and the Islamists

Have you ever asked yourself why Lebanon has its vibrant March 14 Movement, an all-inclusive club of political expression against demagoguery and Syria does not have its own March 15 Movement that is as inclusive? This is an article about the true lesser of two evils.

Alternatively, why the Muslim Brotherhood in Lebanon is almost non-existent, when the same organization has been threatening Syria since the early eighties?

You can find these answers when you realize the effect of absolute, terrorizing tyranny; and fully grasp how destabilizing and threatening the Assad regime is to the whole region.

The Assad tyranny of terror invites exclusion and Islamic extremism when Lebanon’s democratic values invite consensus and dialogue. Yet, many in the West, panicking from an Iranian/Assad propaganda campaign of blowing the threat of the Sunni Islamist extremists out of proportion, seem to forget that of the two evils, the Assad/Iran/Hezbollah is by far the most cunning and the most dangerous. As we said on many occasions, we would rather confront Jabhat al-Nusra after the Assad regime departs than the Assad regime after he disposes of Jabhat al-Nusra.

Keep in mind that you cannot compare the terror of Assad to any other. Qaddafi was a Kindergartner in comparison. The propaganda swirling around Washington supported by Russia, Iran, and the Assad regime seems to fog our minds about which of the two evils is more dangerous.

Of the three different Sunni Muslim extremists fighting in Syria, my short-term concerns rest on the Iraqi-supported al-Qaeda and my long-term concerns rest on the Qatari-supported al-Tawhid Muslim Brotherhood Brigade fighting against Assad. These concerns dwarf the ones the region will inherit if Assad remains in power, as it seems is the real plan of the Obama Presidency. Jabhat al-Nusra, in my opinion, is a short-term threat that will dissipate quickly because the organization gets its funds and weapons through Saudi individuals sanctioned by al-Saud, in addition to aid from other Arab countries influenced by Saudi Arabia. Al-Saud have their man in Gen. Salim Idriss, head of the Supreme Military Council and for reasons that go beyond the aim of this Blog, it is almost a certainty that al-Saud cannot risk a Hezbollah-like operation in any Arab country.

The al-Qaeda group, which has attempted already to absorb Jabhat al-Nusra, is a localized tribal threat. Its roots are deep and its history provides it the means to survive just as the Taliban has survived the onslaught of two successive superpower wars. That, in my opinion, makes them the most dangerous group because they see themselves as an extension of a tribal system that is blind to borderlines. History and loyalties, not geography or people, will then connect Ramadi to Damascus.

However, since al-Qaeda is stateless, attacking its bases and its leadership is by far easier, under international law, than say attacking the Assad regime. That makes a world of difference when defending ourselves becomes a matter of national security. This point seems to be missed by everyone.

My long-term concerns rest on the al-Tawhid Brigade fighting for the Islamism of the Muslim Brotherhood. These hardened men will not simply disappear once Assad is deposed. The al-Tawhid, in my opinion, will survive the war to become a Hezbollah-like organization bending laws, rules, and people to maintain its grip unto power. Unlike Egypt whose army is representative of the Sunni majority, al-Tawhid Brigade will fill the void left by the Assad army if we let it happen. How to confront al-Tawhid means that politically we have to clip the wings of the Muslim Brotherhood, something I only foresee after Obama leaves office in 2016.

The option of naming al-Tawhid a terrorist organization, should the MB not dismantle it, remains a powerful remedy to insure compliance with international laws and a new Syrian Constitution I expect to have more teeth than the MB expects. The true lesser of two evils.

Furthermore, it is quite important to note that Sunni rogue or terrorist groups have very narrow access to the legal mechanisms agreed upon by the international community. When was the last time you heard of or read about a UN Veto in support of al-Qaeda? Now, ask yourself the same question with regard to the Assad regime. The true lesser of two evils.

Assad must be defeated. What comes next will be sorted out and confronted in due time with as much diligence as we can muster. For Frontpage Magazine and Laura Ingram to fall victims to the Assad propaganda is so disheartening to so many who have sacrificed much to see Assad go. Did any who is falling for “Al-Qaeda, al-Qaeda after Assad” think of all the Christians threatened by Assad in the March 14 Movement before panicking to help the Christians who by choice decided to support the terror of Assad? We can defeat al-Qaeda, but we will suffer much more in the course of trying to defeat Assad again if he survives this war.

Think about what you are doing. We will fight the Islamist terrorists after Assad because we will have reason and the laws will be on our side, but if we let Assad survive, the Islamist terrorists will multiply and fighting them will slowly turn into fighting all the Sunni Muslims of the Arab world. What do you think all those Wahabi-built Mosques will be doing? We all know that blame has been refined over centuries by the Sunnis to the point that permits Chechnyans to attack innocent Bostonians when the US was never involved in Chechnya, nor took any sides for or against in their war with Putin. Sunnis will blame, amongst many, Iran, Russia, as well as the US if Assad survives.

Defeating Assad is not a choice; it is a moral obligation and a smart move.

The True Lesser of Two Evils Between Assad and the Islamists