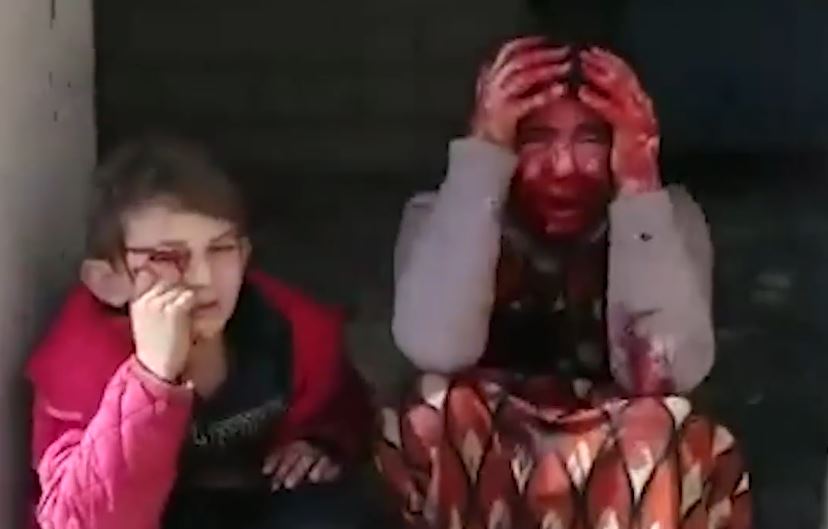 The White Helmets is a civil defense organization whose job is to save lives. Lately, the Russian propaganda machine tried to pin on them the label of “terrorists” because of the many lives they save and both Assad and Putin try to take. Just watch Assad kill terrorist girls hiding their heavy weapons inside head of lettuce.

Seriously, look at the video below of a little terrorist girl praying for the safety of her father Assad just bombed into pieces. Then ask yourself after watching this horrific video who is the real terrorist. Assad is a mass murderer and a psychotic killer.

Many videos were shot by the White Helmets as first responders to Assad scenes of aerial attacks on markets, schools, and hospitals. In placing their videos on their Facebook page, the brave White Helmets wanted the American public to see first-hand the brutality of the Assad regime as it kills civilians it tells the world they are terrorists.

The video below is truly dramatic. If blood turns your stomach, we still urge you to watch. If you don’t, you are probably the people Assad and Putin target with their propaganda and lies. Of course, the Russians will tell you this has been staged. If so, the Oscar for Best Supporting Actress goes to this little Syrian prodigy of an actress.

DID YOU SEE THE HEAVY WEAPONS LITTLE GIRLS ARE BRANDISHING?

Did you see the heavy weapons behind the heads of lettuce? Or those little girls brandishing AK-47 from under their dresses and blouses? These people shopping for their daily needs are the terrorists the world thinks Assad is killing.

How would you like to be the parent of this young girl lying in your own blood? When only few minutes before you were holding her hand while she helped you pick the fruits and the vegetables?

Make no mistakes about it. Assad is a mass murder with deep mental problems, like Putin and Stalin, that lead him to kill innocent civilians. Innocent women and children. The blood of this young girl is on Tulsi Gabbard and Dennis Kucinich hands. They have met and praised Assad on so many occasions it shames the uniform Tulsi wears and the legacy Dennis claims.

For heaven’s sake, write your Congress and Senators. Tell them that between going to war and doing nothing, there is a space for America to stand tall by helping bring the mass murder Assad to justice.