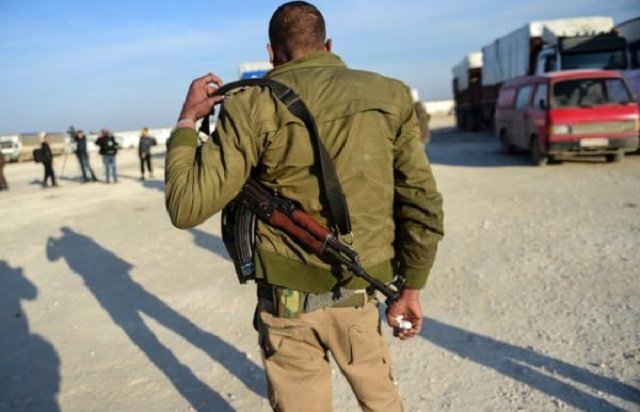 February 18, 2016 5:04 am 0
We Still Don’t Know Why Obama Wants Deal With Iran
Assad to Syrians is what AQ is to America
The Gates of Hell

At least two thousand Syrian rebel fighters have re-entered the country from Turkey over the last week to reinforce insurgents fending off an assault by Syrian Kurdish-led militias, rebel sources said on Thursday. TFS believes thousands of fighters enter Syria to battle pro-Assad Kurdish forces and not just two thousands.

This is a war Turkey cannot afford to lose and most Turks back their president to take action against the Kurds.

The rebel fighters, with weapons and vehicles, have been covertly escorted across the border by Turkish forces over several nights, before heading into the embattled rebel stronghold of Azaz, the sources said.

Abu Issa, a commander in the Levant Front, the rebel group that runs the border crossing of Bab al-Salam, told Reuters giving his alias and talking on condition of anonymity:

“We have been allowed to move everything from light weapons to heavy equipment mortars and missiles and our tanks. There is tight security on the four-hour drive from one border crossing to the other,”

On Sunday, the Syrian government had said Turkish forces were among 100 gunmen who had entered Syria accompanied by 12 pick-up trucks mounted with heavy machine guns, in an ongoing supply operation to insurgents.

The route across Turkey has become the only path for rebels to their north Aleppo enclave after recent Syrian army advances closed the main route into rebel territory.

Activists on the ground confirmed that hundreds of rebel fighters had already crossed with weapons via a border crossing into Azaz.

Another rebel source said the Turkish military have stepped up delivery of munitions and heavy military hardware in the last two days to bolster rebels facing the major offensive launched by the Syrian army and its allies.

The assault has helped the Syrian army come within 25 miles of the Turkish border for the first time in over two years.

The rapid advance of U.S.-backed, pro-Assad Kurdish fighters in northern Syria, taking advantage of Russian air strikes to seize territory near the Turkish border, has infuriated Ankara and threatened to drive a wedge between NATO allies.