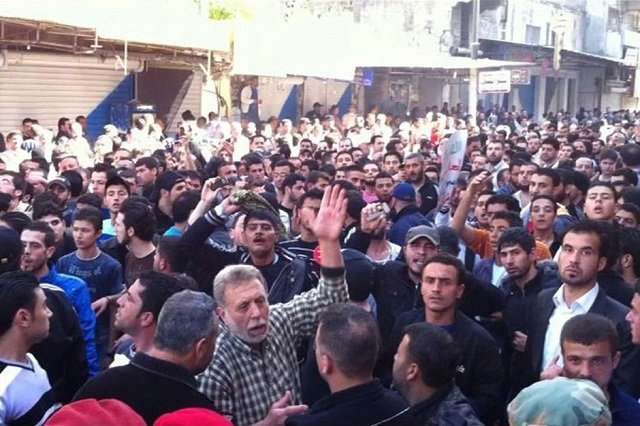 Could the Alawite Protests in Latakia Spell the End of Assad?

Over 1,000 Alawite residents of Latakia took to the streets for a sit-in to protest the cold murder of Air Force Colonel Hassan al-Sheikh. Al-Sheikh was shot dead in front of his children while in his car because he sped past Suleiman al-Assad’s car, a cousin of Baschar al-Assad.

Eyewitnesses said that Suleiman al-Assad caught up with al-Sheikh’s car, swerved in front of it, stepped out, and shot him in cold blood.

The Alawite protesters raised photos of al-Sheikh. They demanded that Suleiman al-Assad be tried and executed for the murder of Hassan al-Sheikh.

Suleiman al-Assad, for his part, attempted to exonerate himself for the murder by accusing one of his bodyguards of pulling the trigger. His account contradicted the accounts of many eyewitnesses who saw Suleiman kill al-Sheikh.

The Alawite protests against Suleiman al-Assad occupied the traffic circle where al-Sheikh was shot.

Many of the Alawites who joined the sit-in intend to continue protesting until Suleiman al-Assad is apprehended and executed for his crime. At TFS, we do not know of any other case where any other Alawite protests demanded the execution of an Assad family member. This is the first in Syria’s history ever since the Assads came to power in 1970.

Suleiman al-Assad happens to be the son of Hilal al-Assad who headed the pro-Assad National Defense Forces (The Shabeeha). He died in March of 2014 on the battlefield. Hilal al-Assad was as infamous as Baschar is and well known for his violent temper and lawlessness.

Damascus has not responded to the Alawite protests. But if they grow, could the Alawite protests in Latakia spell the end of Assad? Is there a momentum being built among the Alawites to rid themselves of the Assad family to choose another leader able to work with the Syrian moderates to expel all terrorists from Syria?

American-Syrians could be hopelessly optimistic sometimes.

Could the Alawite Protests in Latakia Spell the End of Assad?