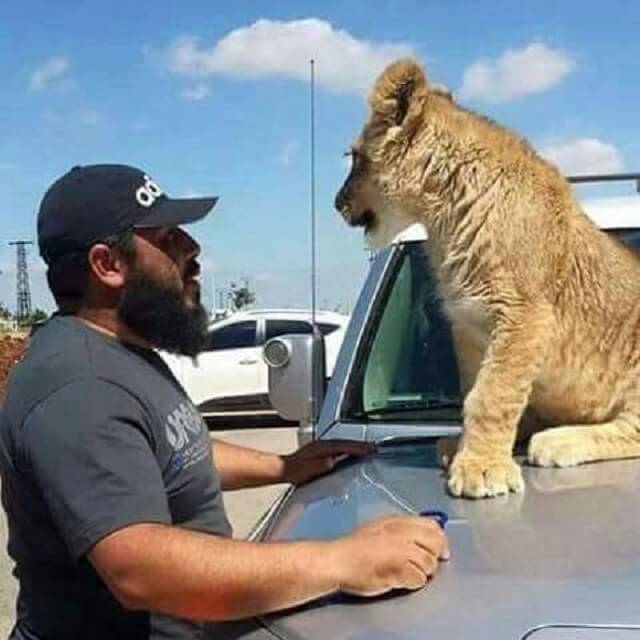 Talal al-Daqaq, a well-known Alawite thug and one of the leaders of the Shabeeha militias in support of the psychopath Baschar al-Assad known for his criminal behavior against residents of the city of Hama, has been killing Sunni prisoners he has either arrested or kidnapped and has been feeding their meat to his cub lion. The Alawite thug al-Daqaq is known to kidnap people for ransom and for his torture of prisoners.

In short, an Alawite thug feeds his lion prisoner meat from people he abducted. This is the naked truth about the pro-Assad Alawites ruling Syria since 1970. It took the Syrian people over 45 years to rise against their tyranny. This does not mean all Alawites are like al-Daqaq. Far from it, the majority want to live in peace and have never harmed anyone. It is all about the psychopath Assad and the violent Alawites that protect him.

A top secret document surfaced (See text below), which was leaked by the Military Security branch in Hama and obtained by the pro-rebel website “Syrian Net”, details al-Daqaq’s involvement in the worst abuses of detainees and abductees, and for feeding his lion with their meat after killing them. Although the document does not mention the religious affiliation of those killed, it is almost a certainty they are Sunni Muslims given his past atrocious behavior against the Sunnis of Hama.

Then people wonder why regular Syrians who have never harmed a fly before in their lives suddenly become ferocious fighters for the Islamist rebels.

Document No. 11201 was issued on September 11, 2015 in which a source in the Hama military airport informed the Military Security branch that “al-Daqaq is rearing a lion cub. which he stole from one of the zoos in Syria but which al-Daqaq claims he purchased from a Lebanese merchant” and that “al-Daqaq was feeding the cub abductee and prisoner meat whom he kills himself, or orders someone in his unit to kill for him, and then proceeds to cut the meat to feed his cub lion.”

According to the top secret document, the Alawite thug al-Daqaq boasts of his deeds and has shown no fear from any authority for his inhuman and criminal acts. The document goes on to state that al-Daqaq has claimed publicly that “he severed pieces of flesh from live “terrorists” and fed them to his cub lion to punish them”.  The Assad regime calls any Syrian opposing his regime a “terrorist”.

The document, which is stamped with the seal of the Military Security branch, further relays that “al-Daqaq has kidnapped more than 100 residents of Hama and its countryside within the last two years, and all of them were liquidated even though their parents paid ransoms to al-Daqaq but he never released them.”

The document further draws the attention to the fact that the regime’s Intelligence Services have been told of al-Daqaq’s deeds on November 7, 2014 with a list of all the abductee names whom he killed and disposed of their bodies. Some of these abductees, according to the document, come from families loyal to the regime.

The document also states that the Alawite thug al-Daqaq is not the only one kidnapping and killing Syrians. It named others such as Ali al-Shalla, Salah Assi, Moseeb Salamah, and Mahmoud Afifah, all of whom were involved in the creation of illegal detention centers that exist in the countryside in western and eastern Hama. One such center is located near the village of Baran, and another is a farm in the Sulmiyeh owned by Moseeb Salamah. These human detention centers are a source of income to these thugs they built to kidnap, kill, and ransom.

The document also states that the four Alawite thugs sell human organs after killing their prisoners. The remains are fed to animals they raise to include the cub lion of al-Daqaq. The source providing the information to the Military Security confirmed that one Alawite thug, one of al-Daqaq’s follower, is responsible for fetching the cut meat where it is stored in a freezer in Tarek al-Daqaq’s apartment in Hama, brother to Talal.

The same source also said that he opened the freezer himself where he was able to see meat from “human necks, elbows, and knees”.

The document, issued by the Military Security branch, seeks for the Intelligence Division to raid the headquarters of the Alawite thug al-Daqaq to arrest him, and at the same time the document suggests that the raid is kept secret as it expects that al-Daqaq and the Intelligence Services may clash.

No word on whether he was arrested or not. 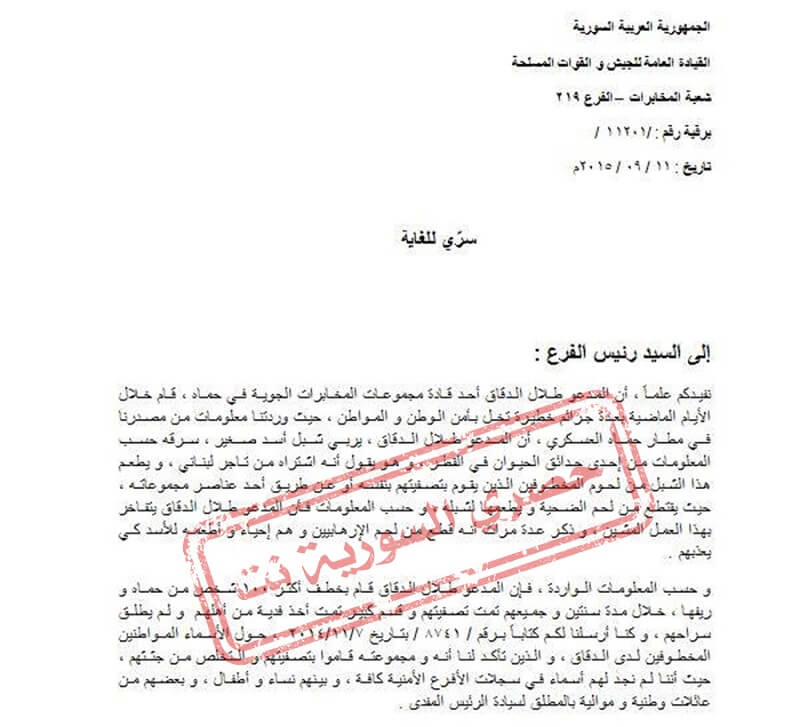