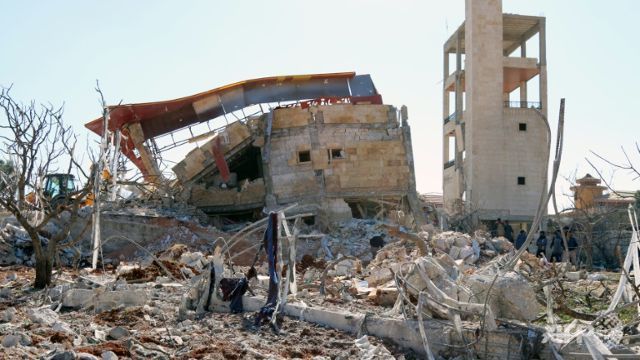 Russia May Have Bombed 60 Health Facilities in Syria

February 18, 2016 5:22 am 0
Stirrings of Labor Unrest Awaken as Russia’s Economic Chill Sets In
The Russians are Humiliating America Comfortably Because Americans Elected President Bambi
The Unbiased Guide to Understanding The Civil War in Syria

In a new report, MSF warned Syria’s health infrastructure “has been decimated”, with frequent aerial assaults and shelling of hospitals and clinics, in violation of international law.

The report comes days after an MSF-supported facility in the northwestern province of Idlib was hit in a Russian air strike that killed 25 people.

Activists on the ground said the attacks have been carried out by Russian warplanes participating in an aerial campaign in support of the Syrian government.

The MSF report said 63 facilities it supports in north, northwestern, and central Syria had been hit in a total of 93 aerial and shelling attacks throughout 2015, with 12 completely destroyed.

A total of 83 health workers at the facilities were killed or wounded in the attacks, the group said.

All the facilities supported by MSF are located in opposition-held areas of Syria because the group does not have government permission to work in regime-held regions and does not operate in territory held by the Islamic State (IS) group. Russia may have bombed 60 health facilities in Syria.

The group said several of the incidents were so-called “double-tap” attacks, in which a second strike followed shortly after the first, increasing the chances of casualties among those responding to the initial incident.

“This indicates that in some instances the attacks go beyond indiscriminate violence, using targeted attacks against rescue workers — including medical responders — as a method of war.”

Since it began with anti-government protests in March 2011, the war has evolved in a multi-front conflict involving the regime, rebels, Kurdish forces and jihadists.

A US-led coalition is carrying out air strikes against IS in the country, and since September, Russia has also been waging an aerial campaign in support of the government in Damascus.

More than 470,000 people have been killed in Syria since the war began, including more than 76,000 civilians.

Between 30 and 40 percent of those casualties were women and children, “indicating that civilian areas were consistently hit by aerial bombardments and other forms of attack,” MSF said.

The group noted that its report only covered a fraction of all the health facilities in Syria, and did not account for deaths outside clinics or from war-related issues like malnutrition or lack of appropriate treatment.

“The real situation on the ground is thus likely to be much worse than depicted in this report. Medical facilities and staff have routinely been subjected to violence, with the result that large sections of the population have been left without healthcare. The health infrastructure in Syria has been decimated.”

The group called for an end to attacks on civilian targets and the protection of medical facilities and staff.

Russia May Have Bombed 60 Health Facilities in Syria