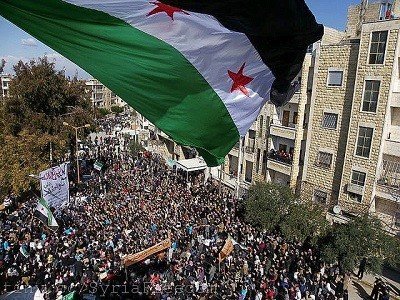 Mr. Rhodes, there were no wrong sides in early 2011

September 23, 2014 3:41 am 0
The Kweiris Assad Graveyard
Assad Massacres 25 Women and Children in Douma
Tickle Me Elmo

Fox News had an article citing ex-Secretary of Defense Leon Panetta as saying on “60 Minutes” that Obama was wrong not to arm the Syrian opposition.

“I think that would’ve helped, and I think in part, we pay the price for not doing that in what we see happening with ISIS.”

Panetta is the second ex-high official in the Obama Administration to criticize, publicly, Obama for his handling of Syria (Ex-Secretary Hillary Clinton was the first). When one looks back at the number of experts and policy makers who warned of the consequences of Obama’s policy on Syria, and all were either dismissed or ignored, it will not be long before this kind of public criticism turns into a deluge.

In response to Panetta, Deputy National Security Advisor Ben Rhodes told Fox News Obama had specific reasons for handling the situation the way he did.

“But the reason that the president was very deliberate in his decision making there is one, we wanted to make sure that we were providing assistance to people who we knew, so that it wouldn’t fall into the wrong hands given how many extremists were operating in that area; and two, we didn’t see a plan that was going to decisively tip the balance against Assad.”

Wait a minute Mr. Rhodes. If you really wanted to know who the men behind the Free Syrian Army were, all you had to do was make a small effort. Instead, your boss blocked all attempts to connect with and arm well the Free Syrian Army. Just ask many of our allies in the region.

Besides, Mr. Rhodes, there were no wrong sides in early 2011 when the protesters were raising US flags and marching peacefully only to be met by a hail of Assad bullets.

In your interview, you may have had to respond to domestic pressures and to Secretary Panetta’s public criticism, but you also fed ISIL the message it needs to recruit more Sunnis. You are an NSC staffer, which means you should know better than say the wrong thing that our enemies will misinterpret more than likely.

Spin saves your boss today from angry voters, but it will not save him from the dictum of history

Obama is paying dearly for his stubbornness, for his weakness, and for his lack of good judgment. He is back into Iraq with his tail between his legs and is about to enter the Syrian theater of war fraught with dangers he is not even close to comprehending. His advisors in Susan Rice and Denis McDonough are destroying whatever legacy this President has stocked on his library shelves.

I recall a meeting between Senators McCain, Graham, and President Obama, in September of 2013, after which both Senators addressed the media outside of the White House (See video below).

During their address, both sounded optimistic the President finally understood how important it was to arm the Free Syrian Army to defeat Assad. Twenty-four hours later, they both realized that Obama used them to ease the pressure off the White House.

I think Senators McCain and Graham should send Obama a letter of “I told you so,” just to cross the t’s and dot the i’s of history.

Mr. Rhodes, there were no wrong sides in early 2011

On Syria Biden Got Away With Murder
How Assad Turned His Barrel Bombs into Acts to Defend Christians
Top Cuban general, key forces in Syria to aid Assad, Russia
Slippery Barack Obama 976