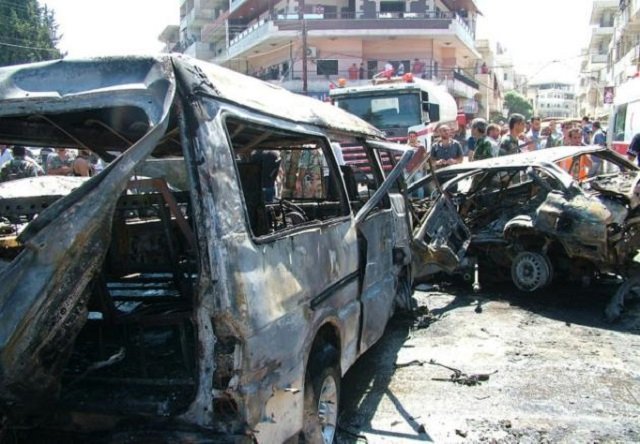 At least ten people were killed and dozens wounded when a car bomb exploded in the Syrian city of Latakia on Wednesday, state television said, in a rare attack in a coastal stronghold of Baschar al-Assad.

Latakia has so far been largely spared the violence that has ravaged Syria during more than four years of civil war, killing around a quarter of a million people. The war arrives Latakia.

The explosion was in a main square, state television said.

Video footage on state and social media showed burning vehicles in an area littered also with the wreckage of cars smashed by the force of the blast. Rescue workers and civilians were seen fighting the fires.

The governor of Latakia, Ibrahim Khader al Salem, told pro-government television channels that insurgents sought to strike at the heart of government-held safe areas that had become a refuge for tens of thousands of displaced families in an attempt to sow “destruction and fear”.

State media said a white van filled with at least half a ton of explosives was parked near a school and had created a huge crater in the square that lies at a major crossroad inside the port city (See video below).

State media said at least two explosive-laden cars had been discovered in recent days in the city in foiled attempts to blow up heavily populated areas.

Separately, a mortar attack on part of the campus of Damascus University killed at least two students and wounded several, state media said.

In recent months there has been a spike in rebel attacks on government-held neighborhoods in the capital and in Aleppo, killing and wounding dozens of civilians.

The army has also stepped up air strikes on rebel-held towns and villages in northwestern Syria and the suburbs of Damascus that have killed hundreds of civilians in the last two months of intensified fighting on major fronts across the country.

There was no claim of responsibility for the attack in Latakia, which state media said was carried out by “terrorists”, a term it uses to describe insurgents fighting to topple Assad.

While Latakia has been spared, the surrounding province of the same name – home to Syria’s biggest port and a stronghold of Assad’s Alawite sect – has been a major battleground in the war. The war arrives Latakia.

Sunni Muslim fighters, including al Qaeda’s Syrian offshoot the Nusra Front, control many villages in the borderlands north of the Mediterranean port city and other areas dominated by Alawites, who follow an offshoot of Shi’ite Islam.

The army had stepped up its campaign in the province since insurgents took the strategically located town of Jisr al Shughour in April, strengthening their position in a mountain range that overlooks Alawite villages and is close to Qardaha, the hometown of the Assad family.

The war has taken on a starkly sectarian character, with the overwhelmingly Sunni Muslim rebels backed by Sunni Gulf Arab powers fighting to overthrow Assad who is backed by Shi’ite Iran.

If Egypt Falls, Syria must follow
Will the Russians Kill Maher al-Assad?
Nuclear Syria or Intelligence on al-Qaeda?
Radicalism 567

Loading...
Newer Post
The ‘What If …’ Questions We Should Ask About the Iran Deal
Older Post
U.S. launches secret drone campaign to hunt Islamic State leaders in Syria