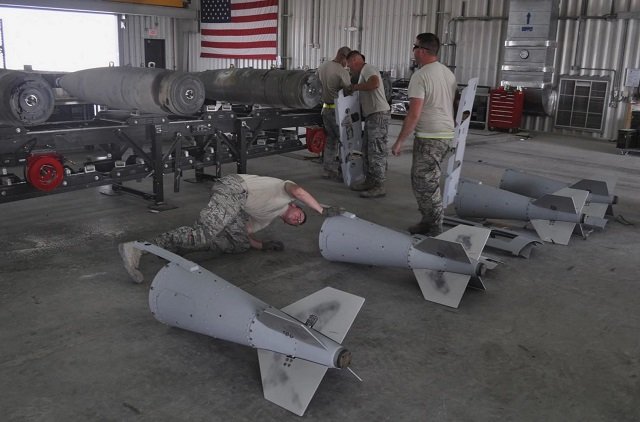 The CIA and U.S. Special Operations forces have launched a secret campaign to hunt terrorism suspects in Syria as part of a targeted killing program that is run separately from the broader U.S. military offensive against the Islamic State, U.S. officials said.

The CIA and the Joint Special Operations Command (JSOC) are flying drones over Syria in a collaboration responsible for several recent strikes against senior Islamic State operatives, the officials said. Among those killed was a British militant thought to be an architect of the terrorist group’s effort to use social media to incite attacks in the United States, the officials said.

The clandestine program represents a significant escalation of the CIA’s involvement in the war in Syria, enlisting the agency’s Counterterrorism Center (CTC) against a militant group that many officials believe has eclipsed al-Qaeda as a threat.

Although the CTC has been given an expanded role in identifying and locating senior Islamic State figures, U.S. officials said the strikes are being carried out exclusively by JSOC. The officials said the program is aimed at terrorism suspects deemed “high-value targets.”

“These people are being identified and targeted through a separate effort,” said a senior U.S. official familiar with the operation, referring to the British militant, Junaid Hussain, and others killed in a recent weeks. Spokesmen for the CIA and the U.S. Special Operations Command, which oversees JSOC, declined to comment. Other officials would discuss the program only on the condition of anonymity.

The decision to enlist the CIA and JSOC reflects rising anxiety among U.S. counterterrorism officials about the danger the Islamic State poses, as well as frustration with the failure of conventional strikes to degrade the group’s strength.

Against that backdrop, the Obama administration has turned again to two of its preferred weapons against terrorist groups: the CTC, which pioneered the use of armed drones and led the search for Osama bin Laden, and JSOC, which includes the elite commando unit that carried out the raid that killed the al-Qaeda chief.

The new adversary, however, poses different challenges. Unlike al-Qaeda, the Islamic State has extensive territory, a seemingly endless stream of recruits, and a deep roster of senior operatives, many of whom served in the military of former Iraqi leader Saddam Hussein.

[The hidden hand behind the Islamic State militants? Saddam Hussein’s.]

The officials said the program so far accounts for only a handful of strikes, a tiny fraction of the more than 2,450 conducted in Syria over the past year. That broader U.S.-led assault, which also includes an additional 4,000 strikes in Iraq, has relied on conventional bombs to dislodge the Islamic State from territory it has seized.

The involvement of the CIA complicates one of President Obama’s remaining counterterrorism policy goals of gradually reversing the agency’s evolution from spy service to paramilitary force. Last year, Obama signaled his intent to have the agency cede control of drone strikes to the Defense Department and return the spy service’s focus to more traditional categories of espionage.

Instead, Syria is a new front in a spreading campaign of secret operations and drone strikes that encompasses Pakistan, Yemen, Somalia and parts of North Africa.

Peter Boogaard, a spokesman for the White House National Security Council, said that Obama remains committed to increasing the transparency of counterterrorism operations by “turning to the U.S. military to take the lead and to provide information to the public.” But he said the effort will be “carried out in a manner that does not degrade our ability to leverage the full range of counterterrorism capabilities.”

The White House had sought in recent months to revive its plan to shift control of drone operations to the Pentagon, but encountered renewed opposition on Capitol Hill. Leaders of the Senate Intelligence Committee responded with a classified letter warning against any effort to reduce the CIA’s role in tracking terrorists.

Senior members of the House intelligence and armed services panels — concerned about preserving their jurisdictions over strikes and the right to be notified — also wrote to express reservations.

Faced with those obstacles, administration officials now see the hybrid approach in Syria as a possible way to salvage at least part of Obama’s plan. The agency will remain deeply involved in “finding and fixing” terrorism targets in collaboration with JSOC but will leave the “finish” to the military, at least in Syria, officials said, using insider terms for the strike sequence.

U.S. officials said there is no plan to impose that template in Pakistan or Yemen, where the agency operates fleets of armed drones largely autonomously. But officials said the cooperation between the CIA and JSOC in Syria is increasingly viewed as a model that could be employed in future conflicts.

The CIA and JSOC program, officials said, is aimed primarily at leadership figures in the Islamic State as well as operatives suspected of being involved in efforts to build a terrorist network beyond the borders of its declared caliphate. Al-Qaeda militants also are approved targets.

Hussain, the 21-year-old British militant killed last month, was moved toward the top of the target list after being linked to one of two gunmen killed in Garland, Tex., this year after opening fire at a cartoon contest that invited participants to draw pictures of the prophet Muhammad.

In the past, the Obama administration has stressed that it was not targeting terrorism suspects involved only in propaganda. When Anwar al-Awlaki, an American cleric, was killed in Yemen in 2011, officials emphasized that he had become directly involved in terrorist operations.

A senior administration official said that Hussain “was more than a propagandist. He was actively involved in recruiting [Islamic State] sympathizers in the West to carry out attacks, and he was specifically focused on orchestrating operations targeting U.S. service members as well as government officials.”

Hussain was tracked in part by monitoring his online activities, according to officials who said that the British government had been consulted on the decision to make him a target.

The strike was among several recent pinpoint attacks distinct from ongoing bombing runs that have inflicted heavy damage but rarely dealt specific blows to the Islamic State leadership ranks.

As part of the Syria buildup, the CIA and JSOC have pulled drone aircraft and personnel from other regions, including Afghanistan and Pakistan, where the withdrawal of U.S. troops and the reduced pace of the agency’s drone campaign against al-Qaeda have freed up resources. The CIA is flying drones only over Syria, not in Iraq, where the Islamic State also has a significant presence.

All of the strikes in Syria are being carried out under the military’s post-9/11 authority to pursue al-Qaeda, officials said, rather than a presidential directive or “finding” issued to the CIA. The restriction means that armed CIA drones can be fired only if they are operating under JSOC authority.

Some U.S. officials indicated that the agency drones were armed while others contested that and said they were for intelligence gathering only and were not carrying munitions.

But U.S. officials said that the collaboration between the two has been streamlined in ways that allow them to work side by side on targeting decisions and all but eliminate delays in executing strikes.

The CIA and JSOC continue to have separate drone operations centers, at Langley, Va. and Fort Bragg, N.C., respectively. But each has sent representatives to the other’s facility, officials said, and both can watch each other’s video feeds.

The cooperation is in contrast to the friction and turf battles that have surfaced between the CIA and JSOC in other conflict zones, particularly Yemen, where each operates a fleet of armed drones, relying on separate streams of intelligence and lethal authorities.

JSOC officials were angered by what they perceived as CIA second-guessing after a 2013 strike on a wedding caravan in Yemen killed civilians and led to a long suspension of JSOC’s authority to launch attacks.

The outcome only added to the skepticism among senior lawmakers that the Pentagon was capable of taking over drone operations from the CIA. Sen. Dianne Feinstein (Calif.), the ranking Democrat on the Senate Intelligence Committee, has been the most vocal critic of the idea, saying in 2013 that she has seen the CIA “exercise patience and discretion specifically to prevent collateral damage” and that she “would really have to be convinced that the military would carry it out that well.”

The agency had to confront its own devastating failure earlier this year when a strike in Pakistan killed two Western civilians who had been taken hostage by al-Qaeda. The agency did not realize that U.S. citizen Warren Weinstein and an Italian aid worker were being held at the targeted compound.

The White House attempted to reinvigorate the initiative earlier this summer by dispatching Lisa Monaco, Obama’s top counterterrorism adviser, to Capitol Hill in an effort to change lawmakers’ minds. The administration abandoned talk of a “transition” of the program and sought to depict it as an “integration” of CIA and JSOC capabilities, officials said.

But key lawmakers remained unswayed, according to U.S. officials who said that Congress has twice in the past two years inserted language in spending bills to restrict funding for any move to take armed drones away from the CIA.

“Congressional concerns have slowed our ability to make these changes,” another senior administration official said in a statement provided to The Washington Post. The official emphasized that Obama never envisioned ending the CIA’s involvement in tracking terrorists, saying that “the U.S. military and the intelligence community both play unique and indispensable roles.”

U.S. officials said the expanded CIA and JSOC efforts in Syria are part of a broader mobilization involving every major U.S. spy service. The National Security Agency has been tasked with penetrating the communications networks of the Islamic State, a group that has exploited Twitter and other social media platforms to broadcast propaganda and attract recruits.

[In a propaganda war against ISIS, the U.S. tried to play by the enemy’s rules]

Syria remains a “denied” area for the CIA, meaning that it has no established presence in the country. Nor are there any acknowledged U.S. military personnel, although Delta Force operators launched an overnight raid into the country in May, killing an Islamic State leader known as Abu Sayyaf and capturing his wife.

The team also made off with computers and other devices that officials said have provided valuable insight into the Islamic State’s structure, leadership and finances. Using intelligence from that raid and other sources, the CIA and JSOC have compiled a list of targets over the past year, officials said.

The effort came as CIA Director John Brennan announced a major overhaul of the agency using the CTC — which surged in size and influence after the attacks of Sept. 11, 2001 — as a model for other parts of the organization.Brennan also appointed a new chief of the center, who is considered easier to get along with than the gaunt, chain-smoking officer he replaced.

Both organizations have access to multiple airstrips in the Middle East that could serve as bases for armed drones.

The CIA has long-standing ties to the Jordanian intelligence service and operates clandestine bases in that country where the agency has trained and armed thousands of fighters sent back into Syria’s civil war.

The U.S. military and European allies operate fighter jets and other aircraft from the Muwaffaq Salti Air Base in Jordan, a highly secured compound that was used earlier this year by a Jordanian pilot who was captured by the Islamic State and burned alive.

The United States also flies drones from bases in Turkey, Kuwait, Saudi Arabia, the United Arab Emirates and Qatar, where the al-Udeid Air Base serves as the Middle East headquarters of the U.S. Special Operations Command.